The Life Of Carbon

Yesterday, I paid a visit to Bicycle Habitat in Soho.  Hal Ruzal is one of the mechanics I go to when I don’t have the time or tools—or am too lazy—to build or fix something.  As he was fixing another customer’s bike, I noticed a bike in his work station. 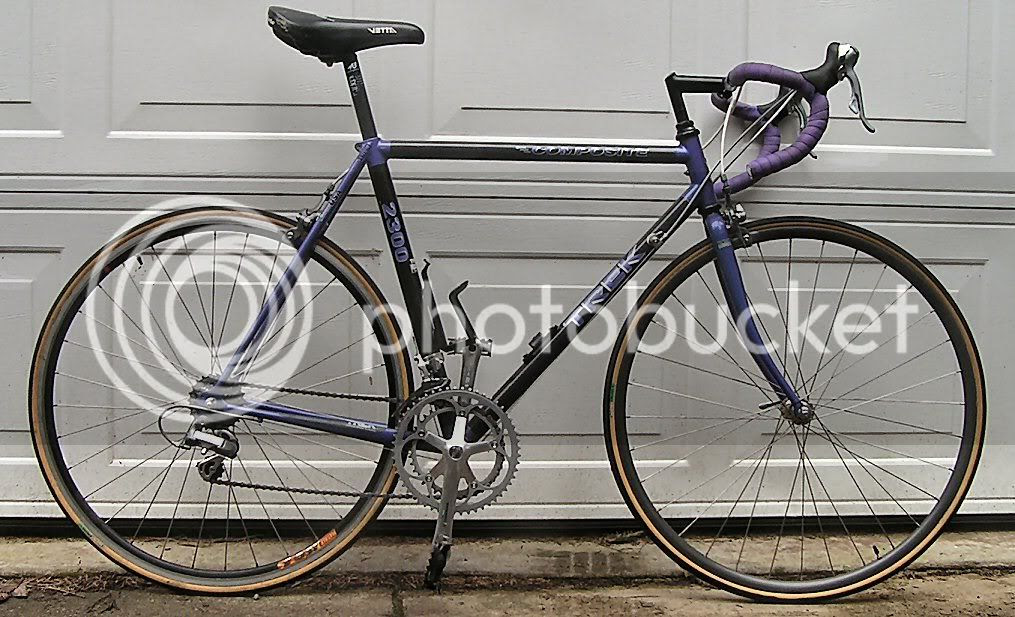 He nodded.  “It’s hardly been ridden at all,” he said.

The bike certainly didn’t look any older than it did the day it rolled out of the showroom in 1990 or thereabouts.  That’s not to say it’s timeless:  While it looked new, it was certainly dated.

Although I was never tempted to buy one, I rather admired them back in the day.  They were sleek, almost elegant, in a high-tech sort of way, with purple lettering and graphics on a graphite-grey frame.


Aside from the color combination, the bike had an almost-classic look because its frame tubes were more or less the same diameter as those on steel frames.  Also, it had the slender joints found on classic frames, although it didn’t have the nice lugwork one finds on the best European and Japanese frames—or even the bikes Trek was building before they started making carbon frames.

At least the frame, unlike too many of today’s frames, didn’t seem to have been built my melting frame tubes together in a microwave oven.  Then again, the way the bike is built might be the reason why so few of them are seen today—or that the one I saw  has survived as long as it has only because it hasn’t been ridden very much.

Hal reiterated something he and others “in the know” have said before:  Carbon-fiber bikes aren’t made to last.  Then again, the same thing can be said about most super-light aftermarket equipment:  something I learned from experience.  As I mentioned in another post, a hub with aluminum flanges bonded to a carbon fiber body collapsed one day while I was riding a smooth road.  I also broke a carbon fiber handlebar, and other riders I knew destroyed expensive lightweight CNC-machined parts as well as stuff made from carbon fiber.


Yet there are people who will—as I did in my youth—ride, or simply buy, such stuff “because the pros use it”.  While those carbon-fiber bars or magnesium wheels (or, ahem, non-round chainrings) might actually give some racer an edge in a World Cup event, said racer doesn’t have to buy, install, fix or replace it.  These days, the stuff sponsors give to top-level pros is intended only for one season; the following year, they get new bikes and parts.  And their teams’ mechanics keep everything running for them.


(Now I am thinking about Miguel Indurain, who won the Tour de France five times during the 1990s.  After he retired, he went shopping for a bike.  He all but fell over when he saw the price tag on a machine like the one he rode: During his two decades as a professional cyclist, he never had to buy a bike or any of the kit he wore.)


From what Hal and others have told me, things haven’t changed.  Yes, today’s bikes are lighter, and probably stiffer (if not stronger) than those of the past.  But carbon fiber frames and parts don’t last any longer than they did in those days—unless, like the Trek I saw the other day, it isn’t ridden.