Campagnolo Adapted Japanese Design; The Public Didn't Rally Around It

In an earlier post, I said that SunTour's invention of the slant parallelogram is one of the most important innovations in the history of cycling.  Just about any derailleur made today that has even a pretense of quality has incorporated the design, which was patented in 1964.  In the early '80's, you could practically hear other derailleur makers panting with anticipation of the day that SunTour's patent would expire, in 1984.  Within a year, Shimano was using the design in its new line of Dura-Ace derailleurs for indexed shifting.  Within another three years, all of Shimano's derailleurs would share their geometries with those of the SunTour VGT and Cyclone.  By the end of the decade, the other major derailleur manufacturers of the era--Campagnolo, Huret and Simplex--would also "borrow" the design as they tried desperately to reclaim the market share Shimano gulped down.

A sad irony  is that after all of those companies adopted the slant-parallelogram, SunTour tried to create an indexed ("click shift") system to compete with the Shimano juggernaut--two decades after SunTour developed an indexed system (and a cassette freehub) that, by all accounts, worked well but for which the world wasn't ready.  Sun Tour's new indexed system, which came out in 1987, didn't work nearly as well as Shimano's because SunTour didn't develop a freewheel or cassette--or a chain--that worked properly with their new derailleurs and shift levers.  Campagnolo made the same mistake with its "Syncro" (which some of us called "Stinkro") setup, in which indexed derailleurs sent stolid Regina chains clattering across imprecisely-cut teeth of Regina freewheels and chains.  Also, its first "Syncro" system used a modified version of its traditional dropped-parallelogram derailleur, which didn't adjust the distance between the top pulley wheel and the freewheel cog--vital for indexed shifting performance--as well as Shimano's new slant-parallelogram derailleurs with sprung top and bottom pivots.


I suspect that one reason why Campagnolo tried, in essence, to make their traditional derailleur design work with an indexed lever (which looked at least something like other Campagnolo levers of the time) had something to do with their experience with their Rally derailleur of a decade earlier.

Before SunTour came out with their slant parallelogram rear derailleur, most wide-range gearing systems--like the ones found touring bikes--didn't shift quickly or precisely.   After SunTour's Grand Prix, Competition and V-series derailleurs entered the market--at the dawn of the North American Bike Boom--Shimano, which was a very minor player in the bicycle components market, wanted to compete.  They couldn't copy SunTour's design for another two decades, so they found ways to modify Simplex and Huret's designs.  The result was something called the "servo pantograph", in which the parallelogram dropped at least somewhat (like Simplex) and the top pivot was sprung (Huret).  The resulting derailleurs--which would become the long-armed Crane and Titlist--shifted reasonably well over wide ranges--better, at least, than the European wide-range derailleurs but not as well as SunTour's.

Even so, the Shimano Crane and even the Titlist were seen as "better" derailleurs than the SunTour V and V-GT because they were more expensive and, to some eyes, more attractive.  That might be the reason why Campagnolo modeled the first edition of its "Rally" touring derailleur on the long-caged version of the Crane.

I actually used one of those early Rally derailleurs for a time.  Once it was broken in (its parallelogram pivots had bronze bushings like the "Record" series derailleurs), it shifted about as well as a Crane--for about double to triple the price.

But certain segments of the European--particularly Italian--cycling community were not happy:  Up to then, the Japanese copied (with notable exceptions like SunTour derailleurs) European designs.  The reverse wasn't supposed to happen, or so they believed.

Some of those who were upset that Campagnolo was making a "Japanese" derailleur (or, as one unfounded rumor had it, that a Japanese company was making it for Campy) felt vindicated when Rally derailleurs snapped in two at the "neck" just below the top pivot bolt.  Some Cranes and Titlists of the same era failed in the same way.  So, the Campagnolo birthers, if you will, believed that the design of the derailleur--which was Japanese--was to blame.

The second generation of Rally derailleurs addressed the problem by beefing up the "neck."  There were very few reported failures.  Then again, not many second-generation Rally derailleurs were sold.  Some who wanted all-Campagnolo touring bikes actually went back to using the Gran Turismo derailleur, which Frank Berto very aptly dubbed "Campy's Edsel".  Others--mainly in the US, and to a lesser extent in the UK--decided that maybe it wasn't such a bad idea to equip their otherwise all-Campy bikes with a SunTour rear derailleur, which shifted much better, and lasted longer, than the GT or Rally-- at a fraction of the price. 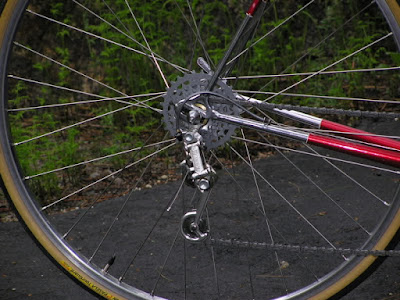 Although Campy's heart was always in racing, it didn't want to lose the high-end touring market.  So, some time around 1977, the Rally was redesigned.  Essentially, it had the same parallelogram as the Nuovo Record, but a longer cage.  Ironically, it mimicked a "hack" that many custom touring bike builders, particularly in England, devised:  They used to make long pulley cages to fit onto Campagnolo parallelograms.  In one way, it makes sense when you realize that the Nuovo Record was sturdier than almost anything else available (especially before SunTour came along) and mechanically simple:  an advantage when one is away from civilization!  Still, it didn't shift nearly as quickly or crisply as even the least-expensive SunTour derailleur, especially with bar-end shifters.

But at least it still pleased the blowhards purists.  And it would be another decade before Campagnolo "borrowed" a Japanese design again.  By then, Campy was desperate and the public was ready.