If The Shoe Fits, Go To Woolloongaba

On my refriegerator, I don't have any kids' drawings because, well, I don't have any kids.  But I do have photos of my cats--along with cards for upcoming appointments with my opthamologist and dentist, as well as various notes to myself.  They're all held by magnets.  Some are souvenirs of places I've visited, like the mini-replica of a Paris street sign for St. Germain des Pres and a Mucha illustration from Prague.

One of those magnets, though, reads, "She who dies with the most shoes, wins." 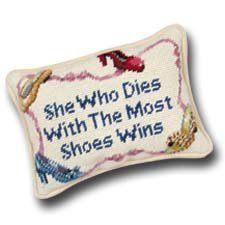 In the early years of my life as Justine, I lived more or less as if that were true--at least, to the degree my budget allowed it.  These days, though, my shoe collection isn't nearly as expensive or flashy as it was then.  I am long past that stage of wearing high heels to go to the store for cat food, for one thing.  Also, I guess you could say that I simply feel more secure of who I am now.

But I must admit, I like to kick up my heels now and again.  I also like to see interesting unusual and beautiful shoes, whether or not they are practical.  Sometimes I'll go shoe "shopping" without any intention of buying anything--though, rest assured, I don't try them on unless I'm thinking of buying!

So, of course, a "shoe bike" is going to get my attention. 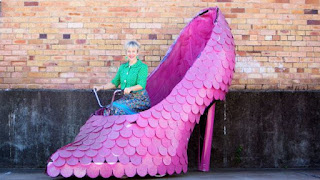 You might remember the closing ceremony of the 2000 Sydney Olympics.  That shoe-bike, and others, accompanied the "Priscilla, Queen of the Desert" float in the parade. 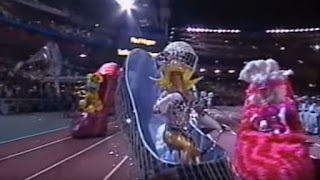 That shoe-bike, and one other, are for sale at an antique shop in the Brisbane, Australia suburb of Woolloongabba.  I mean, any place where such things would be sold has to have a memorable name, right?

Maybe I'll buy a lottery ticket and, if I win, take the next flight out.  Actually, I might be able to afford an actual trip to Australia, whether or not I win.  And I could even buy one of the bikes.  The problem would be in getting it home:  It would probably cost as much as the trip itself, maybe more!

For the record:  Inside each of the "shoes" is a three-wheeled adult tricycle.  So, technically, they're shoe trikes, but it doesn't sound as catchy as "shoe bikes".