Carbon fiber bikes first appeared about four decades ago.  For two decades, they were mainly curiosities or status symbols; they were ridden (if they were ridden) mainly for record attempts or by those who simply had to have the latest equipment. 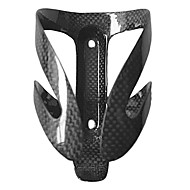 When Trek and other companies started to make carbon fiber bikes priced within range of the best steel and aluminum bikes, parts and accessories with the "carbon weave" pattern became as fashionable as snakeskin or leopard often are among the haute couture crowd. I remember seeing handlebar tape, saddles and even tires with the "carbon basket", as some of us called it. 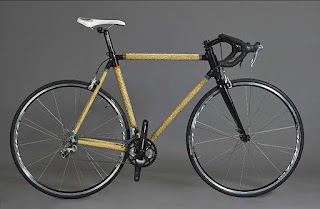 Well, it turns out that carbon fiber isn't the only material that's woven when used in bicycle frames.  Interestingly, this material has many of the same qualities that doomed the early carbon fiber frames but make them attractive (not just in visual ways) to many cyclists today:  It is strong but still flexible, which allows it to be shaped in a variety of ways.  But it is also brittle, and--like early carbon fiber materials--needs to be supported by other materials. 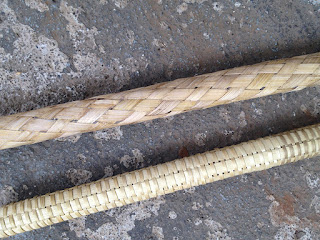 The material in question is bamboo.  Industrial designer Lance Rake (You've gotta love that name!) realized that to make bamboo stiff enough, he had to cut it into thin strips, weave it and  laminate it to another material.  This is more or less how early carbon fiber frames were made:  They fibers were wrapped around, and bonded to another material, usually aluminum. 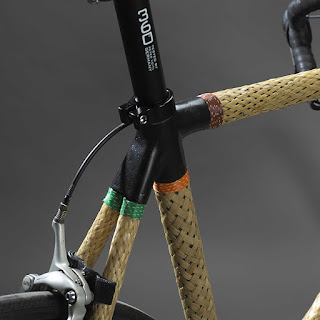 Now, you're never going to believe what Rake is laminating his bamboo fiber to.  Wait for it:  carbon fiber.  In another interesting parallel with early carbon fiber-frames, Rake's bamboo-laminate tubes are joined into carbon fiber lugs.  Most of the early carbon-fiber frames were bonded into aluminum lugs. 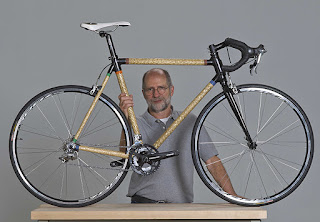 The bike Rake is holding in his hands is fitted with mid-level components and weighs about 19 pounds--more or less what a similarly-equipped carbon fiber bike would weigh.

Will the new "must have" bike accessories have a bamboo-weave pattern?  Depending on the accessory, it might actually look good.
at May 13, 2017