They Can Ride, They Can Shine

One day an elderly woman wheeled her husband into the shop.  Neither of them had been on a bicycle in decades, she explained, but she wanted to buy bicycles for him and herself.

Turns out, he'd had a stroke and, at that moment, couldn't speak.  In fact, his facial movements were constricted.  But I could sense, in his eyes, that he was at least curious about the bicycles.  If I could notice that, I thought, she certainly must have known that he was interested in riding.  Then I wondered whether he had expressed interest before his stroke, or whether that interest was somehow communicated in one of those ways couples sometimes develop.

Whatever the case, she knew what she was doing when she brought him to the shop.  I saw them ride just about every day that spring and summer and fall, sometimes on my way to the shop, sometimes on my way home or out for a ride of my own.  I saw, almost immediately, in his facial expressions (limited as they were) and body language, that she wasn't "dragging" him; he was riding voluntarily, behind her.  Within a few weeks, he was leading her, and looked as if he'd initiated their rides--even though he still couldn't speak (though his grunts and groans became more intelligible).  And she was encouraging him.

They also came to the shop regularly.  First it was to adjust the things that normally need adjustment (cables and such) as a bike "breaks in", but as they rode more, we tweaked the handlebar and saddle positions, and changed things like the grips.  He was attracted to the bright, shiny things--reflectors, bells and other accessories with a bright finish. One day, though, he pointed to the Huret Multito cyclometer (Cyclo-computers were still new.) on another customer's bike and pointed to it.  He had his curious expression again.  Not quite sure of how to explain it to him, I explained it to his wife.

"He understood you," she said.  "He can understand much more now that we've been riding," she explained.  "Sometimes it almost sounds as if he's making words, not just sounds."

That fall--just before I stopped working in the shop--he had, in fact, regained his power of speech and was reading the newspaper.    Later, I heard he'd progressed to books and was writing cute notes to his wife.

Today I thought about that couple for the first time in years when I learned about a cycling camp for disabled children.  It's going to be held in Oklahoma City during the last five days of June. 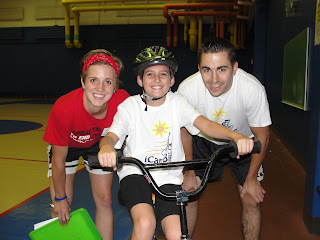 That camp is one of a series--called "iCan Bike"--that's been been held in various locales throughout the USA since 2007.  iCan Bike camps are run by the nonprofit organization iCan Shine, which began under the name "Lose Your Training Wheels" in 2007.  One of the stated goals of the program is for children with physical, intellectual and emotional disabilities to ride a bicycle independently, which iCan Bike defines as 75 feet with no assistance.   According to iCan, 80 percent of kids who participate in the program reach this goal, even though they attend training sessions for only 75 minutes on each day of the program. The remaining 20 percent of kids leave the program with parents, siblings or other people who are trained as "spotters" and can continue the work of the camp.

When I recall how cycling helped the recovery of the old man whose wife wheeled him into the shop where I worked, I am sure that it must be great for kids who don't have the kinds of skills that man had before his stroke!