Maybe I hang out with all the wrong people:  I have yet to meet anybody who likes the idea of a driverless car.  They may not enjoy driving, but they are skeptical that a computer program, or whatever would guide the vehicle, can make the same kinds of judgments a driver could make.

Then there are those people who enjoy driving.  I don't imagine many of them would be crazy about losing one of their pleasures.

So why, then, would anyone want to teach a computer how to ride a bicycle?

Computer scientist Matthew Cook, from what I can see, isn't trying to make a machine that can usurp the role of a cyclist.  Rather, he says, "we do not have great insight into how we ride a bicycle" no matter how well we may ride. 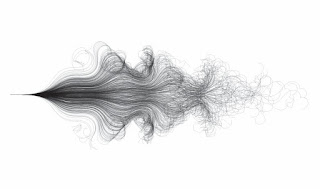 In 2004, when he was at the California Institute of Technology, he created a simulator and made 800 unsteered runs with it to see how far it could go when there is no one to steer it.   The image above shows the tracks of those runs, initiated when the "bicycle" was pushed to left to right, and how far they went before falling down.  Oscillations from side to side, visible in the chart, occurred because the bicycle was moving too slowly to keep itself stable.

As a result of this work, he found that it took a simple network of only two neurons to keep the bike stable:  one to calculate the required lean of the bicycle to execute a given judgment in direction, and another to translate that change into an amount of torque to apply to the handlebars.

Cook says his work could have "many applications", but doesn't specify what they are.  My guess is that it might be helpful for people to regain skills and faculties lost or impaired in crashes and other traumatic events:  Simulators like Cook's might, for example, provide insights into how our minds and bodies allow us to do some of the things--like balancing a bicycle or walking--we do instinctively. Also, I could see how "test dummies" for bikes could be developed to better test helmets and other products.

I just hope no one develops robots that can push us aside and take our bikes!
at February 05, 2018

Email ThisBlogThis!Share to TwitterShare to FacebookShare to Pinterest
Labels: balancing a bicycle, how we learn how to ride, Matthew Cook, riderless bicycle