In previous posts, I've talked about the role bicycles played in women's rights.  And, although I've posted it before, I'll repeat a remark of Susan B. Anthony:


Let me tell you what I think of bicycling.  I think it has done more to emanicpate women than anything else in the world.  It gives women a feeling of freedom and self-reliance. I rejoice every time I see a woman ride by on a wheel...the picture of free, untrammeled womanhood.

"Free, untrammeled womanhood." Funny she should say that.  When I started my transition from life as Nick to being Justine, I wondered whether I would continue cycling.  I lost some of my strength when I started taking hormones, though some of that loss may have been due to aging.  (I was in my mid-40's when I started.)  I also wondered whether cycling would fit into the image of femininity and womanhood I was trying to project at the time. 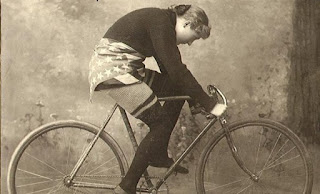 Happily, I didn't have to trade cycling for my identity because, well, cycling is as much a part of my identity as anything is.  Though I am not as strong or daring as I once was, I don't have to be when I'm on the bicycle.  Perhaps this knowledge is also what has allowed me to feel comfortable in riding what I like rather than following this week's trends.

And, here is something else I believe Ms. Anthony would approve:  I see cycling as much a part of my identity, not only as a woman named Justine, but as a feminist.  When you come right down to it, feminism is the freedom to do as we see fit, or as we please. Cycling fits that definition as much as anything--including reading and writing--for me.

So, I am hoping that some of the ice I encountered in the aftermath of yesterday's late-day storm clears out by the time I leave work.  That way, I can celebrate this day with--what else?--a bike ride!