Most people don't realize that there isn't a neighborhood called "South Bronx."  Rather, it's a section of the borough that consists of a number of different neighborhoods.  Depending on whose definition you believe, they all lie south of the Cross Bronx Expressway, Tremont Avenue or Fordham Road.

By any definition, I work in what's now being called "SoBro".  (Uh-oh.  There goes the neighborhood!)  I also enter it--and, specifically one of its neighborhoods--when I ride off the Randalls Island Connector:

They really let you know where you are, don't they?  To be specific, that mural graces Willow Avenue between 134th and 135th Streets in the heart of Port Morris, a mostly industrial area at the very southern tip of the Bronx.

But that's only half of the mural.  Here's the right-hand side of it, with a detail: 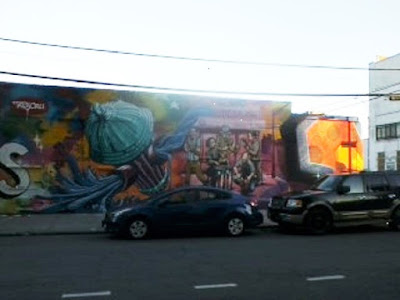 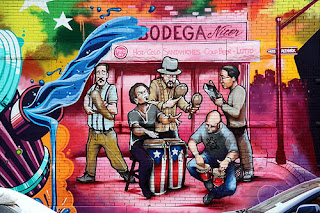 I first saw this mural a couple of weeks ago, when I decided to vary my commuting route a bit.  Actually, I decided to take Willow Avenue when I saw a sign for a bike lane that recently opened along its side.

I know I've been critical of bike lanes.  The one on Willow Avenue is, like others in the city, separated from the street by a couple of lines of paint and a few poles.  But there actually isn't much traffic on Willow:  Most of the motorized vehicles are on the nearby Bruckner Expressway.  But you do have to watch for trucks pulling in and out of the driveways that cross the lane into factories and lofts.  I must say, though, that truck drivers are generally (at least in my experience) more careful and courteous than others.  They often honk and wave to me!

And I get to see some street art.  Those, I think, are good reasons to change up my commuting route.  At least I know exactly where I am!