Colorado To Allow Cities To Choose The Idaho Stop

As I've mentioned in previous posts, Idaho enacted a law that allows cyclists to treat red lights as "Stop" signs and "Stop" signs like "Yield" signs--all the way back in 1982.  Since then, other jurisdictions have passed similar ordinances.  But nearly all such regulation in the ensuing three and a half decades has been at the local level.

Lawmakers in Colorado, where a few municipalities already have such legislation, seem to have noted this reality.  They also seem to have noticed that other places haven't passed such laws because of hurdles they faced in doing so.

At least, I hope that is the reason why the Colorado House of Representative passed SB18-144 last week and the state's Senate voted for it this week.  Governor John Hickenlooper is expected to sign it into law. 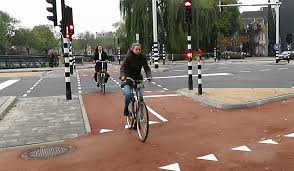 SB18-144 makes it easier for cities, towns and other localities to adopt "safety stop" (a.k.a. "Idaho Stop") rules by creating a standard ordinance.  One hurdle local politicians faced in enacting such rules is that they might not align with the laws in other--sometimes neighboring--municipalities.  In other words, the bill, if signed, would give them a template they can adopt.

So why doesn't the Centennial State (or any other state) simply mandate the "safety stop" statewide?  Well, in some places--particularly in spread-out rural areas found in states like Colorado--people just don't like to be told what to do by remote bureaucrats, whether in Denver or Washington.  But more important, the ordinance contains language stating that it shall not apply to any part of the state highway system.  That seems to have been a technicality that kept a different version of the bill from passing last year.

Those jurisdictions, such as Aspen and Summit County, that already have similar regulations will be allowed to keep them if the law is passed.