The past decade or so has seen efforts to promote cycling as a viable form of transportation, not to mention recreation.  Such efforts have included everything from the establishment of bike share and earn-a-bike programs to the construction of bike lanes.

The latter, along with other bike infrastructure, varies widely (to say the least) in the quality of conception and construction.  One hopes (or at least  I hope) that planners will learn from their mistakes or be replaced by folks who understand cycling.

Nearly all of the work I've mentioned, though, has been initiated locally--usually by cities or independent organizations.  There have been few initiatives on the county, state or national level here in the US or in other countries. 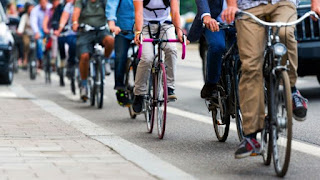 That may change.  One of the most influential worldwide organizations is making at least a token effort to promote cycling around the globe.

That organization is none other than the United Nations.  On 12 April, at a Regular Session of the General Assembly, a resolution was discussed.  It was adopted by a consensus of the 193 member states.

The resolution declares 3 June as World Bicycle Day.  The purpose of that declaration is, according to a UN press briefing:

[to] emphasize and advance the use of the bicycle as a means of fostering sustainable development; strengthening education, including physical education, for children and young people;  promoting health; preventing disease; promoting tolerance, mutual understanding and respect; and facilitating social inclusion and a culture of peace.

What the UN is saying is, in essence, that cycling can help to achieve some of the organization's stated goals.  I think they're right. (As a longtime cyclist, I'm a totally unbiased observer, right?)  Things like peace, sustainability and respect for each other's humanity seem all the more important in the days after the missile strike in Syria and a report that the Gulf Stream is the weakest it's been in more than a millenium and a half.
at April 17, 2018