Would Fat Have Become A Fad?

Practically from the moment Specialized introduced the "Stumpjumper" in 1981, would-be pundits said that mountain bikes were a "fad."  Some of those wise folk were in Schwinn's management, which may be a reason why the company filed for bankruptcy a decade later.

Anyway, any number of things in the bike world have been called "fads" almost from the moment they saw the light of day.  One of them is the "fat bike", which typically sports tires 3 inches or more in width.  Although I have never ridden, and probably won't ride, such a bike myself, I am not about to sound its death knell, even if most examples of the genre I've seen don't exactly fit in with my sense of aesthetics.

Still, though, I have to wonder whether "fat bikes" would have endured had they been introduced, say, 130 years ago.

That is about the time "safety" bicycles appeared.  They are like the machines most of us ride today:  two wheels of the same size powered by a chain-driven drivetrain.  Before that, cyclists mounted "penny-farthings" with front wheels of 60 to 80 inches (150 to 200 centimeters).  Could such a bike have been made "fat"? 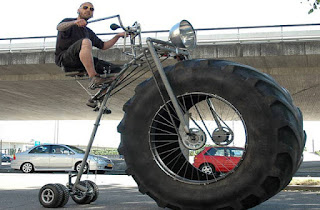 Looking at that photo, I can't help but to think that perhaps "fat" bikes would have been a fad that disappeared, say around 1890 if the first "fatties" had been high-wheelers!
at April 22, 2018