Fitness And Birth Control In One?

If you peruse the listings on eBay, Craigslist or other selling sites, you'll find bikes for sale from sellers who have no interest in cycling or no idea of what they're selling.  Those bikes might be part of an estate sale, or they might have been left behind when someone moved.

Most of the time, the ads read something like "I don't know anything about bikes, but I know this is a good (or expensive) bike."  The bikes usually are misrepresented, though not deliberately, and are often overpriced because, as an example, the seller knows the bike is a Peugeot but doesn't know a PX-10 from a U-08 and tries to sell the latter for the price of the former.

Then there are those ads in which the seller tries, unsuccessfully, to describe what he or she is selling.  Parts are misnamed; brands are confused with other brands, and wheels and frames are mis-measured.

Rarely, though, does one find so much disdain expressed for a bicycle and for cyclists as I found in this Irish ad: 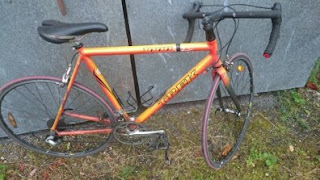 Do you want to spend several hours of your day staring at a man's spandex clad buttocks? Do you want to preplex co-workers and family with details of how you spend most your weekend in uncomfortable, sweaty, silence? Or do you just want an excuse to escape from your significant other for large periods of time? Then look no further, for I have a racing bike for sale!It has a carbon fibre fork but the rest of the frame is aluminium. It has those pedals that clip your feet in, this is apparently good for cycling but it sucks if you need to stop suddenly because you'll probably fall over, to much pain and embarrassment. It also has a saddle that goes up ridiculously high. This is also good for cycling, I'm told, but I think it really goes up that high so you can present your posterior to other, similarly engaged cyclists as a form of mating ritual. The seat is also designed with racing in mind, by which I mean it's light, by which I also mean that it's not padded a huge amount. It can't imagine it does much good to your reproductive health, but maybe that's the point. Fitness and birth control in one.It has many toothy wheel things, which I am reliably informed are called 'gears'. My brother says it has 20 but I count 12, but I never was any good at maths. There is no combination of switches you can press on this thing to make climbing hills any more pleasant, unfortunately.It's got twirly handles, I haven't got much to say about those. Probably aerodynamic or summat. It also has kevlar tyres, which I assume makes them bulletproof. Now, I'm not the biggest fan of cyclists but I would draw the line at shooting at them.Comes with a free helmet to protect your brain when some braindead Irish driver inevitably knocks you into a ditch, despite the fact that your colour scheme is so fluorescent that you could be radioactive.(In all seriousness, my brother gave this to me as he spent god knows how much on a new carbon-fibre bike, and I have no interest in it. Here's more details on the bike:http://www.roadbikereview.com/cat/latest-bikes/road-bike/trek/1000/prd_290760_5668crx.aspx )
Shipping: To be arranged
Payment: Cash