Day Of The Dead, On Two Wheels

In Mexico, today is celebrated as el Dia de Muertos, or the day of the dead.  The holiday originated with indigenous people, and current ways of celebrating it can be traced back to the Aztec beginning-of-summer festival honoring the goddess Mictecacihuatl  (If anyone has an Aztec spell-check, let me know!)  After los conquistadores arrived in the 16th Century, the holiday was moved to the beginning of November to coincide with the Roman Catholic feast of All Saints' Day.

In France and some other countries, families leave crysanthemums on the graves of deceased relatives on Toussaint.  (During my childhood, many Italian-American families did the same thing.)  In one of her essays, Marguerite Yourcenar observed that autumn rites are among the oldest and most universal, and are held after the last harvests, when "the barren earth is thought to give passage to the souls lying beneath it".

Anyway, I actually found a Day of the Dead bike jersey: 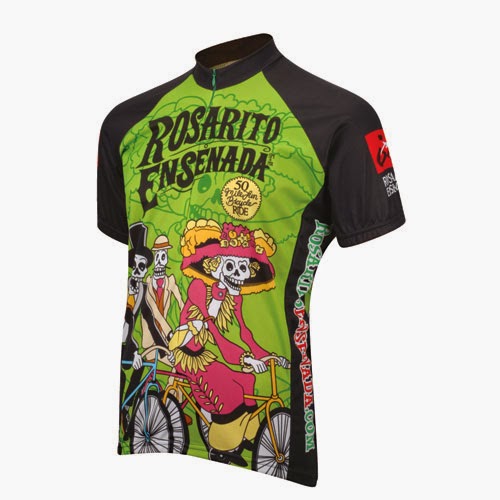 and some artwork, including this tandem bicycle hearse, if you will 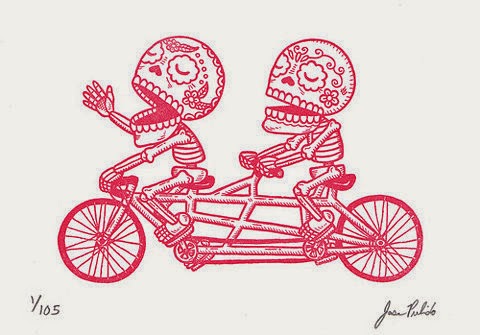 Take the motors away from Hell's Angels, and you get this: 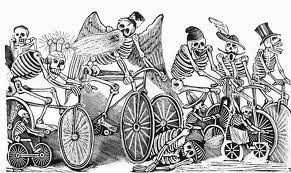 Believe it or not, some people actually get married on this day: 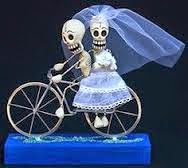 Now, if any of you gear freaks are looking for the ultimate bike part, check out this seat: 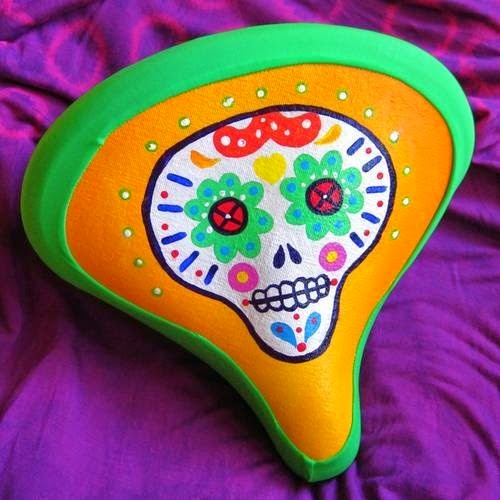 Finally, if you want something that expresses the spirit of this day better than this blog post, check out this poem from--who else?--Emily Dickinson:

Because I could not stop for Death
He kindly stopped for me –
The Carriage held but just Ourselves –
And Immortality.

We slowly drove – He knew no haste
And I had put away
My labor and my leisure too,
For His Civility –

Or rather – He passed us –
The Dews drew quivering and chill –
For only Gossamer, my Gown –
My Tippet – only Tulle –