The James Farley Post Office, known to New Yorkers as "The Main Post Office" often has some interesting exhibits--including one that's there now. 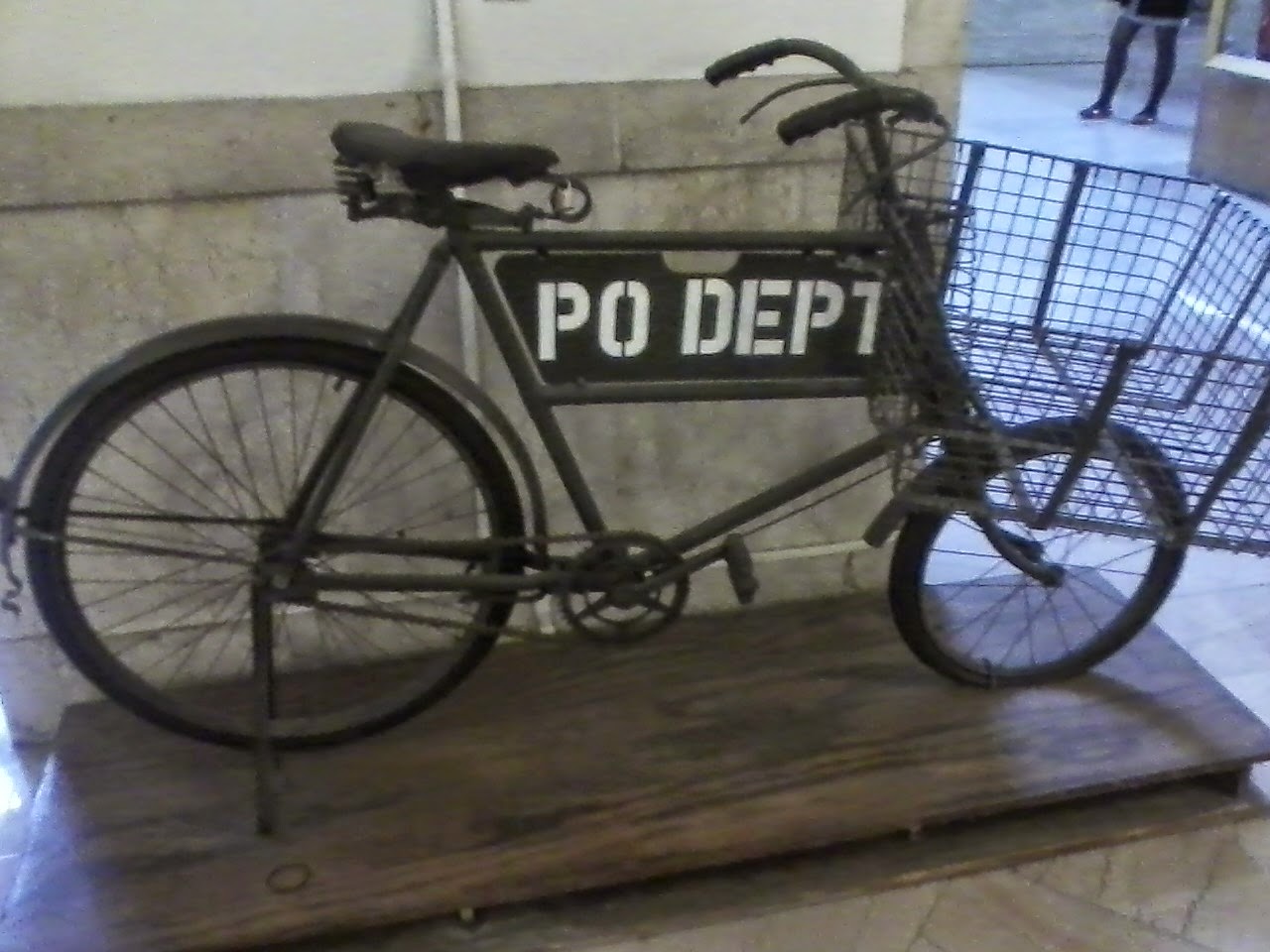 It's said to be a postal delivery bicycle from the 1940s. From the looks of it, the date sounds about right. 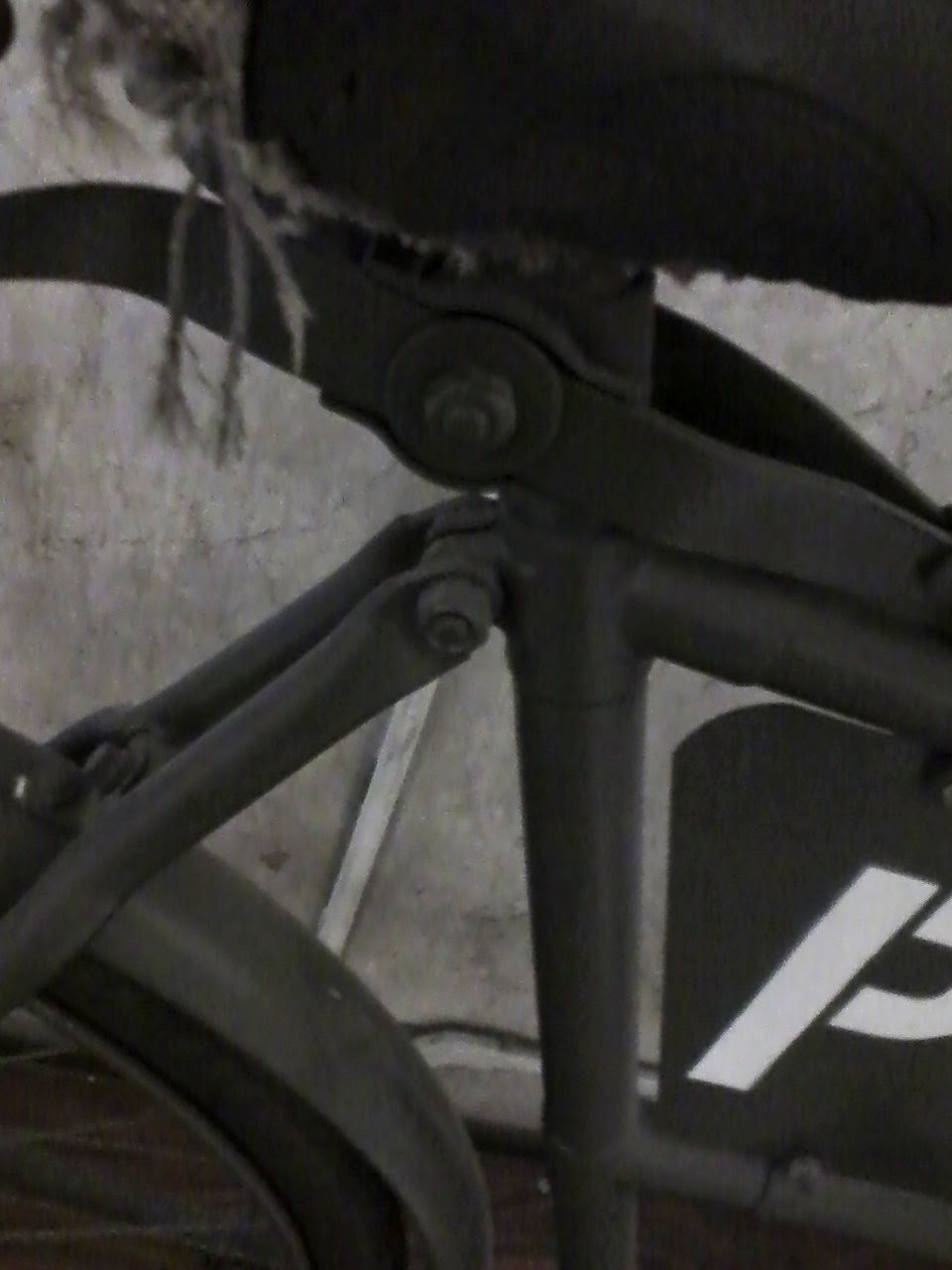 I couldn't find any markings to identify where, or by what company, it might have been made.  Some features, such as the seat lug and cluster and the rod brakes, mark it as an English bike from that time.  Probably the only American bike builder that made frames with lugged joints was Schwinn, and that was only on its top-of-the-line Paramounts.  Also, the Paramount might have been the only American bike built with cottered cranks, as cotterless cranks were still new, rare and expensive.   And, to my knowledge, no American (and, for that matter few, if any, non-British) bikes had rod brakes. 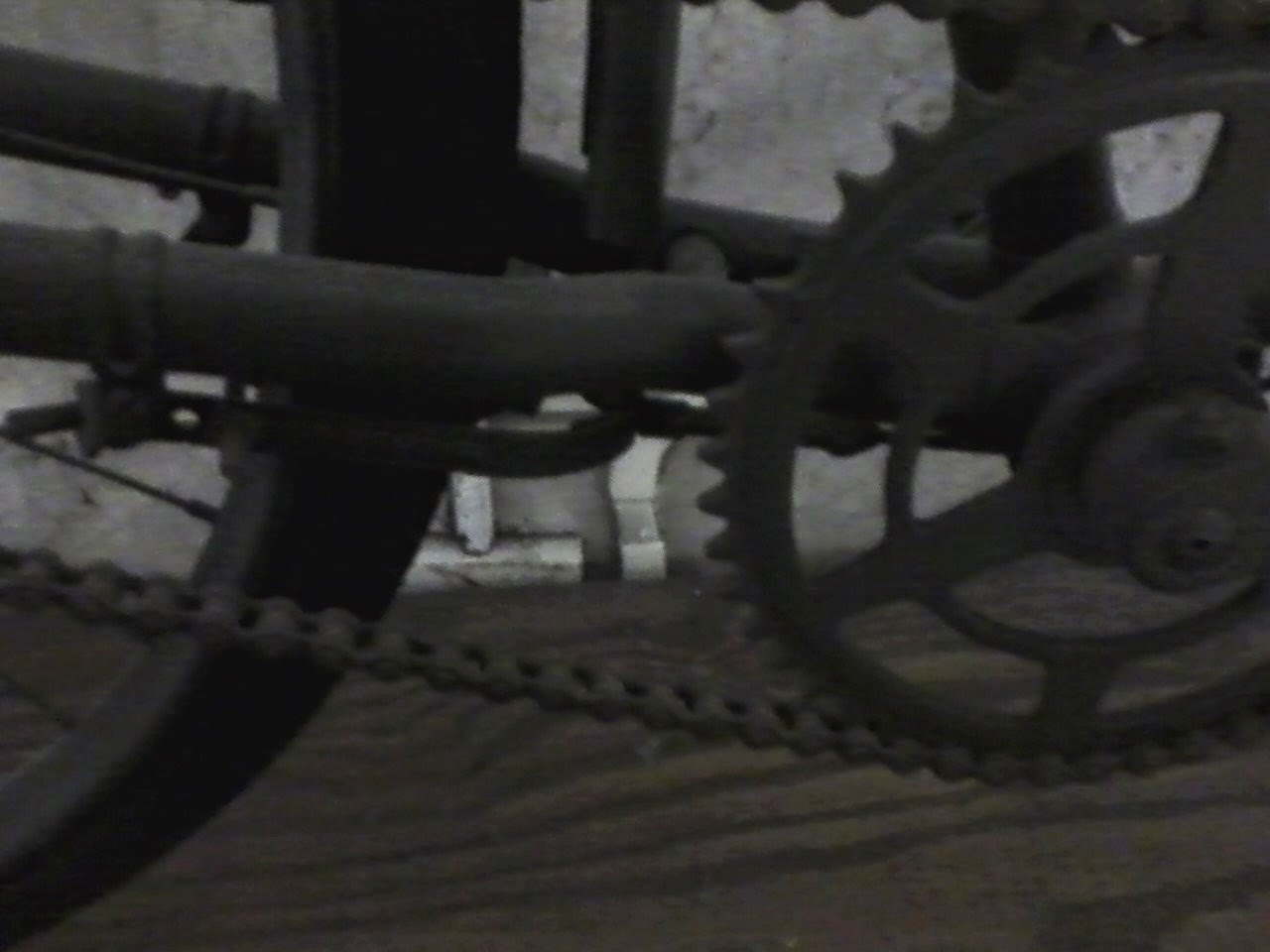 It would be interesting, to say the least, to know that the bike was made elsewhere, as it was all but unheard-of for the US Government or military in that era to have its supplies made for them overseas.

Here is something else that marks the bike as British or otherwise non-American: 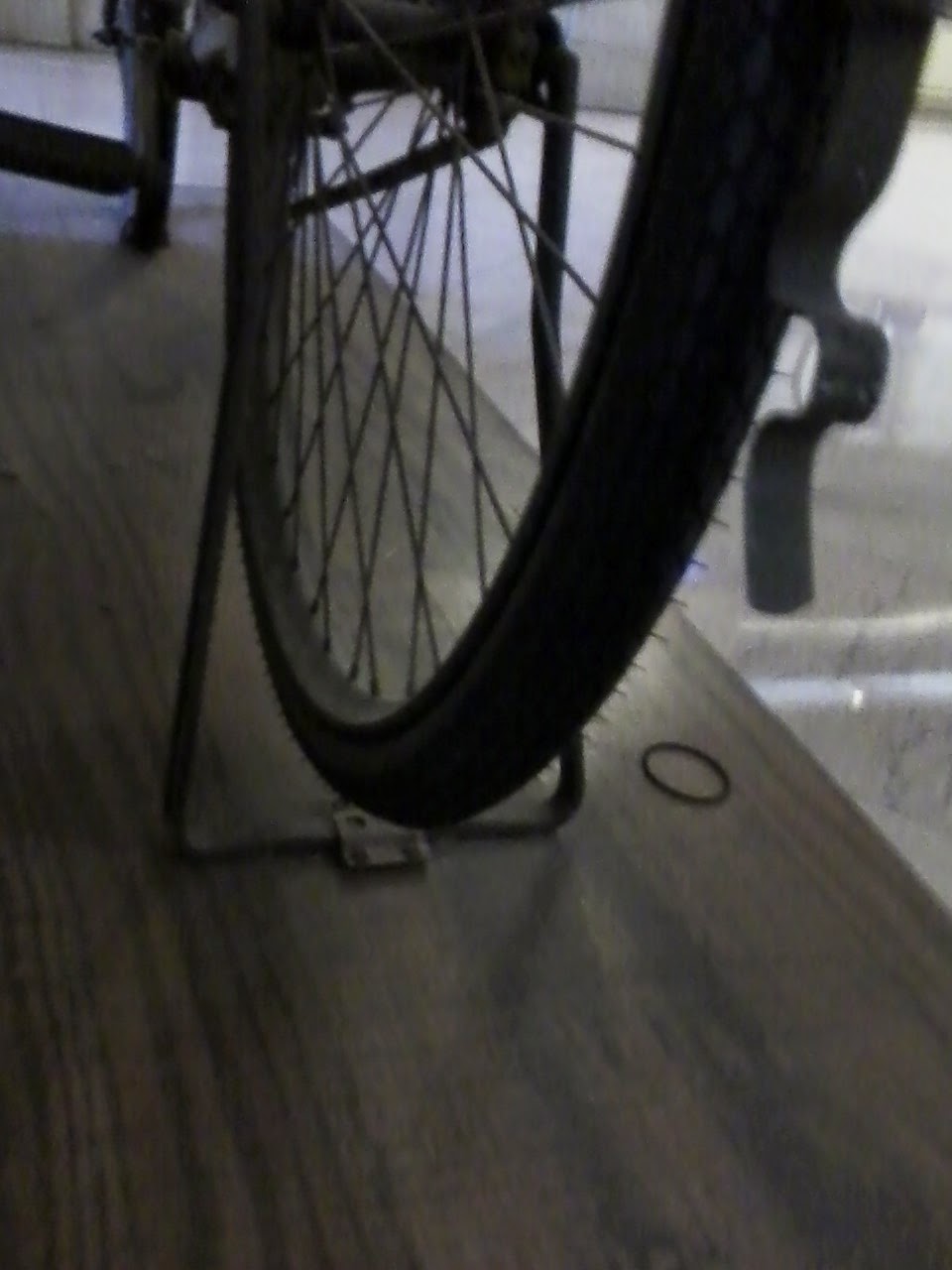 The stand, when kicked back, would snap into the curved piece of metal protruding from the rear fender.  Probably no kickstand would be strong or stable enough to hold up the amount of weight held in the front basket: 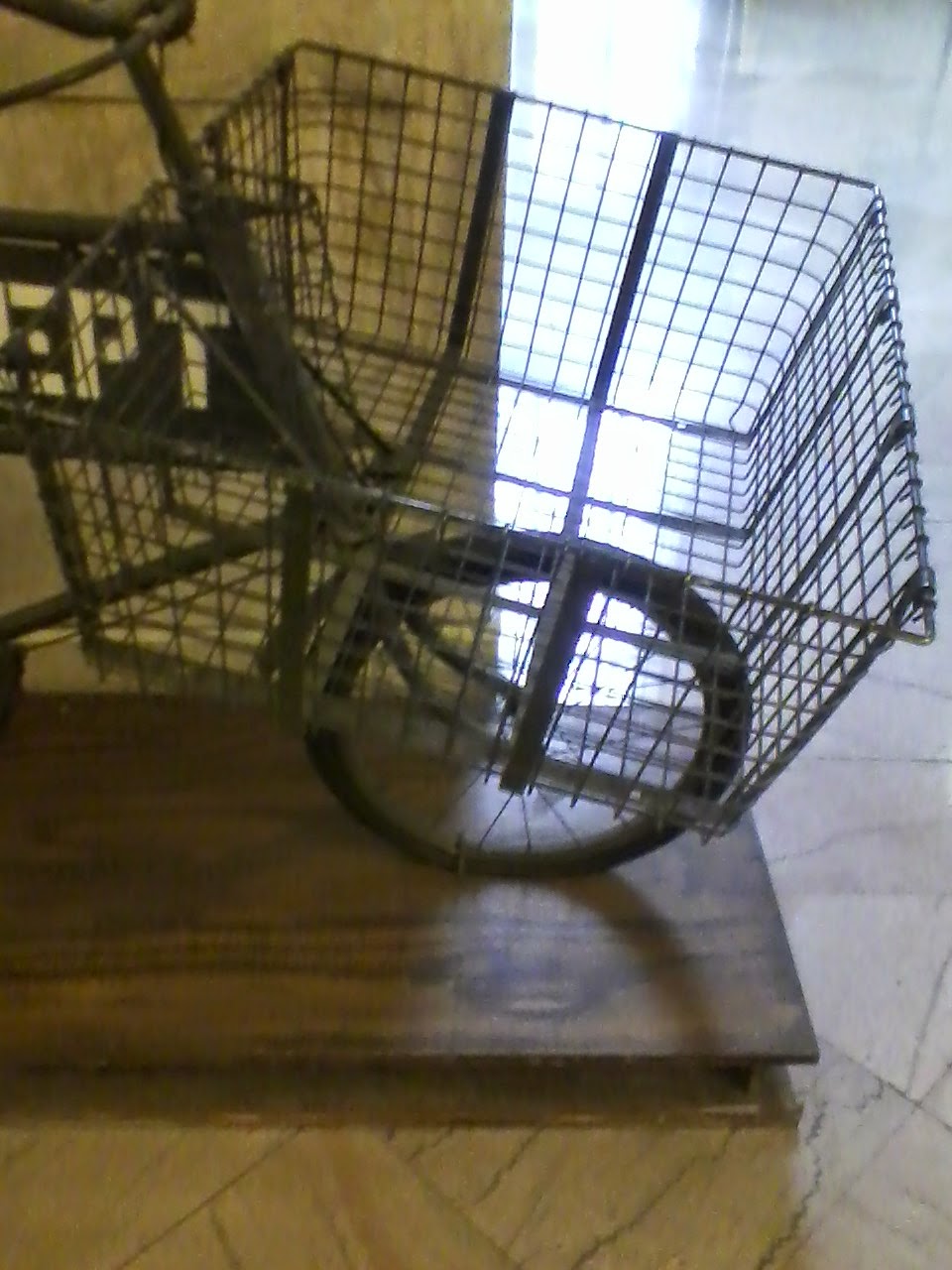 Speaking of which:  That basket, combined with the small front wheel, make for some of the strangest proportions I've seen on a bike. But it makes sense, as such a small front wheel is probably the only thing that makes the bike maneuverable with as much weight carried in the position it would have been carried in that basket.

Many of us in the US don't realize that in many countries--including Denmark, the Netherlands, France and New Zealand--significant amounts of mail are still delivered by men and women pedaling two wheels.  The practice seems to have begun in those countries, as well as in the US and UK, during the 1890s.  It declined in the US after World War I, as highways and motorized vehicles became more common, and routes became longer.  However, bicycle deliveries enjoyed a resurgence during the 1930s and World War II, when gasoline and other commodities were rationed.   Then it fell off again during the 1950s and today seems to be limited three American municipalities:  Sun City in Arizona and the Florida communities of St. Petersburg and Miami Beach.

Since the USPS, like other government agencies, has been ordered to "go green", I wonder whether  hope that we will see more mail carriers on bikes.   The three cities I've mentioned have warm year-round weather and are flat; there are other such places in the US.  Also, in traffic-choked urban centers, bicycles can be faster and more efficient than cars.  (It is in such centers that much of Europe's postal bike fleets and personnel are deployed.)  Perhaps we're looking at a new career opportunity for hipsters and their fixies!
at November 17, 2014