I Wasn't Expecting A "Beach Day"


This weekend began quite lovely, if rather chilly.  Now, if that sentence sounds impossibly Victorian, or at least British, so be it.  There is something languorous, in a pre-war sort of way, about Memorial Day weekend, which many in the US regard as the beginning of summer.

The sky has been almost preternaturally bright, as if breezes were brushing away every trace of clouds.  It also pushed away heat, which I don’t mind in the least.  Temperatures of 15 to 20 C (60 to 68 F) are, to me, all but ideal for cycling.  But it’s not exactly beach weather—at least to most people—and the water temperatures are around 13C (55F).

So, I figured that people wouldn’t go to the beach—which meant it would be a good day to ride to Point Lookout.  Or so I thought.

The ride itself was pleasant enough.  I encountered a bit more traffic than I anticipated, and on summer days—in fact or in name only—it’s never too early in the day for drunks to spill out of the Long Beach bars.  If anything, I saw a few more inebriates than usual, for the college students had just come home.  A group of them played “chicken” with me, thrusting their faces into my path to see how close they could come to getting smacked by my helmet. 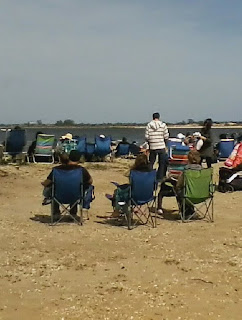 The beaches and boardwalks were full of people.  A few dipped themselves in the water; a few donned wetsuits and surfed.  At Point Lookout, as you see in the photo, people propped themselves on the cinderblocks or on beach chairs to watch airplanes make squiggles and bows with their vapor trails.

Shows like that aren’t my kind of thing.  My father loved them, so I saw lots of them when I was growing up.  So, while I respect the skills the pilots of those planes have, I’m not enraptured by frivolous displays of bravado.  More important, though, I don’t like the message behind those shows.  Most people—at least, the ones I saw at the show-- seem to believe it’s “Support Our Troops”.  Having a brother in the Armed Forces, I’m all for “supporting” them.  However, I don’t want to throw them in harm’s way for no good reason—or, worse, for them to be used to celebrate our ability to make war.

After two of the planes made a heart or something with the vapor trails, I hopped back on my bike.  The wind blew off the ocean and at my left side until I got to Rockaway Beach, where I turned right.  From there, the wind carried me home under blue skies, away from the vapor trails.