Another Misty Morning Starts Off, And Turns, Sunny


Got out nice and early today.  How early?  Well, it was so early that…

I didn’t know what the weather was, or would be during the first hour of my ride.

Usually, weather reports on the radio tell you what the current temperature and conditions are at some central stations.  And they tell you what will be at that station, and in a generalized area around it, for the rest of the day, and possibly for the next three days.
When I left my place, it was a bit cooler and breezier than I expected.  I didn’t mind that, but I had to remind myself that even in the four or five kilometers between the Central Park weather station and my apartment, conditions can change.

What that means, of course, is that the weather could be even more different as you go further away—especially if the terrain is different, there is greater or lesser density of buildings, or some other factor affects the speed and direction of the wind.

Although it was about 15C (60F) when I left my apartment—vs 17C (65F) at Central Park—it was as sunny here as the weather report said. However, when I pedaled over the Veterans Memorial Bridge, 27km (about 15 miles) from my place, this is what Rockaway Beach looked like from the Jamaica Bay side: 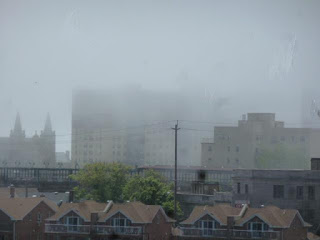 The weather report didn’t mention the low-lying fog.  I wasn’t upset to see it; instead, I was looking forward to riding through it as droplets of the cool sea mist clung to my skin.  Best of all, that fog had spread itself all through the Rockaways, as far as I could see in either direction—left to Atlantic Beach, Long Beach and Point Lookout, right to Fort Tilden, Breezy Point and Brooklyn.

I turned right only because I rode to Point Lookout yesterday.   The ride did not disappoint: 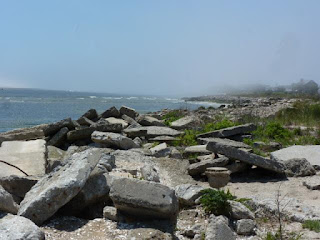 Light like that makes me wish I were a painter!  As a cyclist, I let and fill and lift me.  At least, that’s how I feel when I allow it to direct my ride.  Arielle was game: 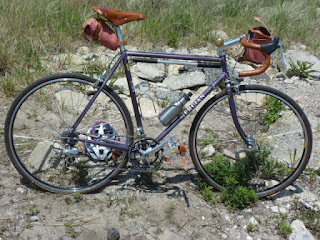