A Bike Lane Through The Clouds?

Rain and drizzle, then drizzle and rain.  Repeat a half-dozen or so times throughout the day.  In between, fill the streets with mist that thickens each time the rain stops.

I don't know whether such a recipe exists, but the weather-makers seemed to follow.  Just because you think someone is making the weather, it doesn't mean you're a conspiracy theorist.  Now, if you think the CIA is doing it, you're a Paranoid Conspiracy Realist.  If such a category of people didn't exist before today, I take credit for inventing it.

All right. The weather really wasn't what most people have in mind when they envision the ideal beginning to a summer weekend.  But there was something rather nice about it.  At least I think so. 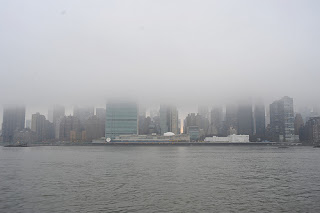 This photo was taken by Asterix 611.  I didn't have my camera with me, and I didn't like the images I captured on my cell phone.  But this one gives you a good idea of what I saw today.  And I just happen to like it as a photo.
Judging from what I saw, the clouds hovered around 300 to 400 feet above street level.  It's ironic for me to realize that the clouds today were even lower than the ones through which I pedaled in the Alps, Pyrenees and Green Mountains.  Instead of a Stairway to Heaven, I'll ask the city to build a Bike Lane Through the Clouds.   Then Portland will have nothing on this city!
at June 24, 2011