Girls, Bikes And The City

On my way home from my "Hasidim and Hipster Fixies" ride, I met and chatted with another woman on a bike.   She's been living in Brooklyn for a while and wants to find some new rides.  And Bruce has told me that I make a good tourguide. So, we exchanged e-mail addresses and today we went for a ride along the Brooklyn and Queens waterfronts, across the RFK Bridge into Randall's Island and alongside the East River in Manhattan.

Helene was definitely "up" for this one.  She's wanted to have a girl's night, or day, out in the city! 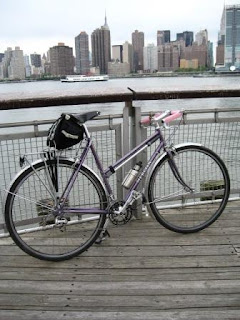 One of the wonderful things about introducing someone to places you know well is that you discover new things in and about them.  We ventured into a part of Greenpoint I hadn't visited in a while, where we found a workshop of some kind: 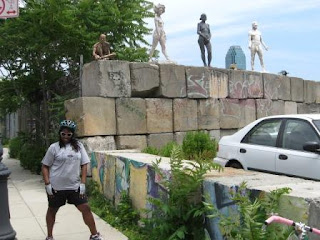 Look at her, and look at the second statue from the left.  Of course, I had to get into the act: 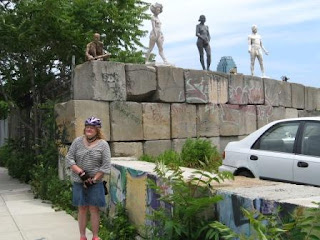 I guess I'm not quite the performer she is.  Then again, I may not have had the right role.  Last week, in the midst of the sleep deprivation nearly all instructors experience at during the last days of a semester, one of my colleagues said I was looking a bit like Pierre de Wissant as he appeared in Rodin's Les Bourgeois de Calais.
Anyway, I enjoyed the ride and the company of my new riding companion.  After we parted, Helene insisted that we stop here: 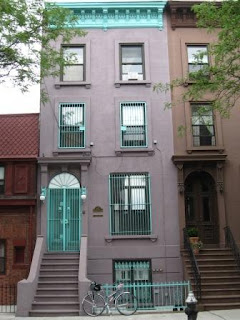 I mean, she has a point:  I have three Mercians (including her) with paint finish number 57:  a purple that turns green when you look at it from certain angles.  So now I need a house to go with them.  Hmm...If my book sells....