If you don't know what that means, you never read James Joyce's Ulysses.  Don't worry, though, I won't castigate you.

(All right, I know there are other words I could've used.  But I get a cheap thrill out of "castigate", especially now that I am a woman.)

The events in what some have called the greatest novel of the 20th Century all take place on one day:  16 June 1904.  That, in and of itself, is as ironic as anything in the book, which almost nobody ever reads in one day.

I won't try to summarize the book here:  I'm not sure that such a thing is possible.  I won't even do a song and dance to convince you that you should read the book and love it.  All I'll say is that reading it is an experience like no other. 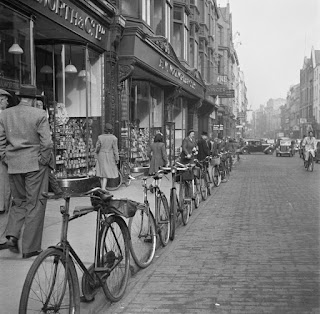 To me, it reads like an encyclopedia of a person's subconscious mind.  There is almost any kind of event, instruction or wordplay anyone could imagine.  Yes, there are even references to bicycles and cycling, including this description of a race in Episode 10, a.k.a. Wandering Rocks:

Bang of the lastlap bell spurred the halfmile wheelmen to their sprint. J. A. Jackson, W. E. Wylie, A. Munro and H. T. Gahan, their stretched necks wagging, negotiated the curve by the College Library.

As with much else in Ulysses, this seems to have had a basis in real life.  Or, at any rate, Joyce seems to have taken the names of the riders from a Daily Telegraph account: