When Does "Parked" Turn Into "Abandoned"?


Whenever I see a bike locked in the same place for a long time, I wonder:  Did its owner suddenly have to attend to some urgent matter in some far-off place? (One commonly finds bikes locked up in and around military bases for months, even years, under such circumstances.)  Did he or she fall ill or get hurt?  Or did he or she simply abandon—or forget—the bike?

I’m not thinking, now, about those bikes that are parked in the same spot every day while their owners are at work, in school or performing some other daily ritual.  Even if the bike is locked to the same signpost, parking meter, fence or rack every day, you can see signs, however slight, of its having been moved.  Also, you can tell that the bike has been ridden, whether because of dirt, scrapes, fading or just the normal wear one sees on tires and other bike parts.

Rather, I am thinking about those bikes that have moved no more than the Pyramids have since they were parked (all right, built) in Egypt.  You can tell that they haven’t been unlocked, ridden and returned:  Everything on them looks the same, day after day, until—if the bike is left long enough—parts start to rust and paint starts to fade.  I’m thinking now of bikes that were parked outside the Cooper Square post office so long that locals joked the decaying skeletons of steel and carcasses of rotting rubber were part of the building’s design. 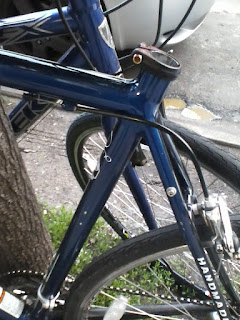 The Cannondale in the photo has been parked around the corner from my place for a couple of weeks, at least.  It looks just as you see it:  It stands in the same position, and it’s had its seat and seatpost missing all of that time.  I assume—or, at least, hope—the bike’s owner took them off after locking up the bike.  I hope someone else didn’t take them off:  It’s not fun to come out and find your seat missing even if that’s not quite as bad as finding your bike missing.

Since it’s a modern bike==a fairly-late-model (I say this because it was made in the USA.) Cannondale—I can safely assume that the bottom bracket is a sealed cartridge.  Even if it weren’t, there would probably be an “accordion” sleeve between the bottom bracket cups to shield the axle and bearings.

But protection doesn’t last forever.  Neither does lubrication.  But the results of either failing do.  (Remember:  I’m talking about bicycles here, oh you of dirty mind!)  Of course, the bike would have to be parked for a long time for the seals or shields, and the grease, to break down.  We had heavy, flooding rains on Sunday and Monday, and on-and-off rain ever since.  So, even if the bottom bracket isn’t affected, you have to wonder whether the rest of the frame would be affected.

The Cannondale is made of aluminum, so it won’t rust. But that metal oxidizes and corrodes.  Perhaps those of you who are more knowledgeable than I am about metallurgy can tell whether or not there is a point at which aluminum will start to deteriorate from corrosion the way iron or steel does from rust.

Anyway, I’m sure that sooner or later the bike’s owner will come for it.  Something interesting has happened, though, in the last few days:  another bike in exactly the same color has been locked next to it.   Was that Trek recognize the Cannondale’s dark blue color the way leopards supposedly recognize each other by their spots? 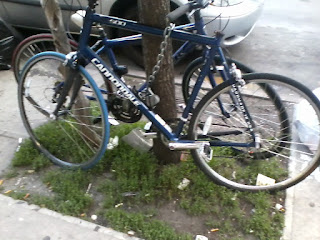