While pedaling up a hill, I saw this: 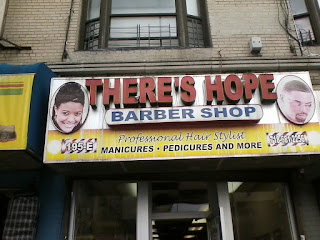 Now, the hill wasn’t particularly steep or long, and I was riding Tosca, my Mercian fixed gear.  But right now she has a gear of 47x17, which isn’t high but isn’t exactly a climbing gear.  Still, I managed to get up that hill without getting out of my seat or breaking a sweat.  But I have to admit that I liked seeing “There’s Hope”—which is all I saw as I started the climb.  It was only about halfway up when I realized that the place was a barber- and beauty-shop.  Until I saw the subtitle, I thought it might be a storefront church or one of those centers where twelve-step programs meet—neither of which would have surprised me in that neighborhood.

I think it’s kind of funny that a barber- and beauty-shop would have such a name.  Perhaps I should have gone in and asked whether they’d make the same claim for someone who’s as completely un-photogenic as I am.

Anyway, after ascending that hill, I came to a garden.  Well, all right, the name of one—sort of: 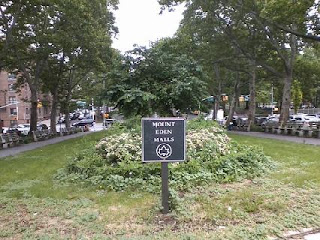 Somehow I never associated Eden with mountains.  In any event, I’m glad the city created that green mall along Mount Eden Avenue, which traverses a low-income neighborhood that immigrants from the Caribbean, Latin America and West Africa call home.

A bit further up in the Bronx, I felt a bit like an urban archaeologist when I came upon this, across from the WoodlawnCemetery: 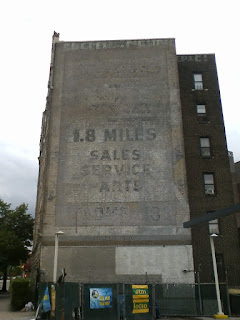 Here in New York, one occasionally sees advertisements that were painted on the sides of buildings decades, or even generations, ago.  Although almost nobody would consider them Fine Art (at least, not with a capital “F” and a capital “A”), some show a level of illustrative vividness—and pure-and-simple imagination and craft—one rarely finds today.  That is why I have respect both for whoever created, and whoever actually painted, those ads. I am sure those people are, unfortunately, long dead.

On the other hand, the graffiti “taggers” who painted their "signatures" on the building next door (which I wasn't able to photograph)  may be alive and well.  Perhaps they have become “legitimate” artists; perhaps they are doing things entirely unrelated to art.  Or—this being the Bronx—they also might be long dead.  Somehow it’s strange to see graffiti (at least here in New York) that seems almost as much an ancient artifact as a grotto unearthed by some construction crew building a hotel or office tower or parking lot in some city along the Mediterranean.

Speaking of history:  Believe it or not, in the Bronx, there’s a still-standing house that’s even older than this country.  This house was built sixteen years before the Declaration of Independence—and two centuries before I was born: 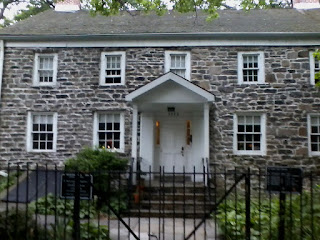 The Valentine-Varian  House is now home to the Museum of Bronx History.  Unfortunately, it wasn’t open when I got there.  But I’m going to make it a point to go there again soon, when it is open.

If that house is still standing—and I climbed some hills (by choice)—I feel that I can say, after all, There’s Hope!

P.S. Can you guess what this building is? 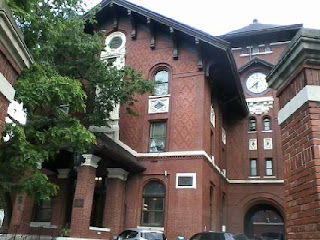