Did This Idea Ever Fly?

We have all felt, at least once, that we were "flying" while riding our bicycles.

In a sense, it always feels that way because we're not surrounded by walls or sheets of steel.  More often, though, when we say that we were, or felt as if we were, "flying", we mean that the ride was fast and effortless:  We were feeling good and spinning our gears while the wind pushed at our backs.

Most of us don't mean that we were literally aloft.  However, a few cyclists have gotten their wheels off the ground.  And I'm not talking about the kid on E.T.!

Nearly half a century before one of the world's favorite movies came out, a French inventor came up with this: 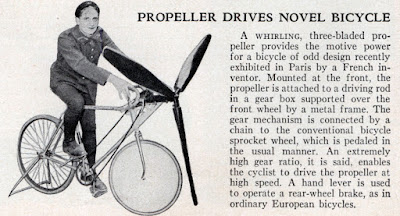 In the November 1936 issue of Popular Science, it was described thusly:


PROPELLER DRIVES NOVEL BICYCLE
A whirling, three-bladed propeller provides the motive power for a bicycle of odd design recently exhibited in Paris by a French inventor. Mounted at the front, the propeller is attached to a driving rod in a gear box supported over the front wheel by a metal frame. The gear mechanism is connected by a chain to the conventional bicycle sprocket wheel, which is pedaled in the usual manner. An extremely high gear ratio, it is said, enables the cyclist to drive the propeller at high speed. A hand lever is used to operate a rear-wheel brake, as in ordinary European bicycles.
As a cyclist who came of age during the 1970s--in the twilight of that decade's Bike Boom--I find the last sentence particularly fascinating.  I'm guessing that in 1936, most Americans had never seen or ridden a bike with a hand brake:  Most American bikes at that time were made for kids and had coaster brakes.

I wonder whether that bike got off the ground, literally and figuratively.