Here in the US, it's Presidents' Day.

When I was growing up, we used to have two Presidential holidays in February--Lincoln's Birthday on the 12th and Washington's on th 22nd.  Somewhere along the way, the government decided to consolidate the two observances into one, which would be on the third Monday in February.  At the same time, some other traditional holidays, such as Memorial Day, also became Monday fetes.

Now, if you've been reading my recent posts, you know what I think about the current President, whose name I dare not speak!  I must say, though, that it's ironic that the most anti-bike President we've had in a long time (perhaps in all of history) is also the only one ever to have sponsored a bike race.  That is how, for two years, the Tour DuPont--at that time, the most important race in the US--became the Tour de Trump.

In past posts, I wrote about, and included photos of, presidents (including a couple in other countries) riding bikes.  One of my favorites is of Jimmy Carter three decades after leaving the White House, and looking younger than he did then.  I also liked the one of former French President Nicolas Sarkozy, his politics notwithstanding, and of former candidate Mitt Romney on his bike while doing Mormon missionary work in France.

Back when I was working for American Youth Hostels, I read somewhere--a biography, perhaps?--that Franklin D Roosevelt cycled "all over Europe" during his youth, freqeuently staying in hostels.  As a child and young man, he frequently took trips there, as someone of his social and economic status was wont to do.  If I recall correctly, his early trips were made, not surprisingly, with his parents and other family members, while as a teenager he went with his tutor, who also enjoyed cycling.

I also seem to recall that one or both of them were arrested in Germany for eating cherries they picked on a roadside, and that they committed a few other misdeeds.  I have read, elsewhere, that he was a fun-loving young man who skated along the surface of life.

Anyway, I tried to find a photo of FDR on a bike.  I couldn't, but I found this, by artist Mike Joos: 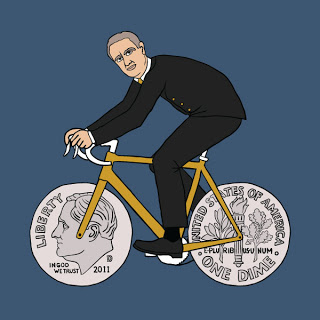 By the way, today is also National Love Your Pet Day.  This is the first time I've heard of the holiday.  I wonder whether it's held on a fixed date, as nearly all holidays were when I was a kid, or whether it's a "movable feast" and it just happened to fall on President's Day.

I know one thing:  I'd rather spend time with Max or Marlee than just about any President! 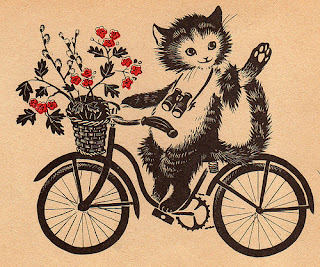