A Rainy Day Of Contrasts

The rain started some time before I woke up. I think the young woman at the hotel's front desk knew it would rain throughout the day, and called a tuk-tuk driver for me.

That was a really good call.  The rain came and went until about two this afternoon.  Then it washed down in a torrent through the rest of the day and well into the evening.

I first saw Apocalypse Now on a cold, rainy day (Christmas Eve, no less) the year that it was released.  So I guess it makes sense that on a rainy day here I would go to--wait for it--the Landmine Museum. 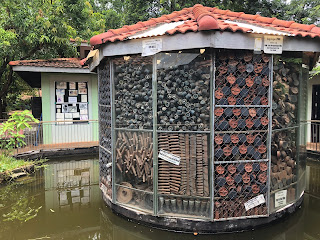 Yes, such a thing actually exists. (I wasn't so surprised:  After all, I went to a Mushroom Museum and Mustard Museum in--where else?--France!)  But you don't have to be a military buff to appreciate it.  In fact, the aim of Aki Ra, its founder, is not to glorify war or fetishize weapons.  Rather, he wants to alert people to the fact that there are so many landmines and the harm they cause. And he has a goal of de-mining Cambodia by 2025. 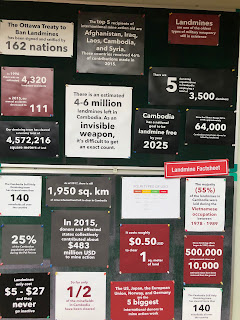 In spite of his Japanese-sounding name, he's actually Cambodian.  He chose that name for himself after a Japanese journalist gave it to him.  Before that, he had a number of different names, not because he was trying to evade debt collectors, but because he was essentially "adopted" so many times. 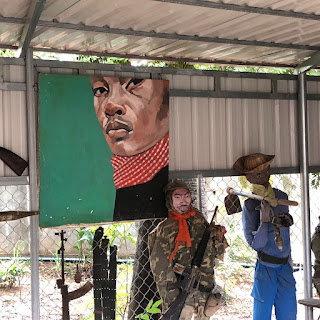 Except that his "adoptors" weren't well-heeled go-gooder Western families.  Rather, as he says, he doesn't know exactly when he was born, but he believes it was in 1970.  Orphaned early, he was conscripted as a child soldier, first by the Khmer Rouge and, later, by the Vietnamese army after that country invaded.  As he recalls, he was taught how to use a rifle that was bigger than he was, and he preferred using rocket launchers because, at least, he could lie down while aiming them.

His training also included the installation of land mines.  He became such an expert with them that he was called on not only to install them, but to find them.  That also gave him the expertise to find other kinds of munitions  on the ground.

After the fighting ceased, he used his expertise to de-mine.  He's not the first to undertake such a task:  Many a Khmer peasant has dug up, or simply stumbled upon, these explosives.  To give you an idea of just how poor they are, they disassembled them to sell the scrap metal.  Some didn't live to tell about it; many others lost limbs, eyes, ears and other body parts.  I have seen a few such unfortunates in my travels here.

Sun Ra himself admits that, even with his expertise, he is very lucky to be unscathed--at least physically--from the thousands of mines and other munitions he found.  They became the basis of the collection in the museum he started, which is run by an NGO he helped to found.  Today, that organization works to detect and extract land mines, not only in Cambodia, but in the Middle East, Europe and even the Americas.

As the museum's commentary reminds visitors, once placed, landmines can cause damage indefinitely.  In 1965, an explosion in Alabama resulted from mines placed a century earlier, during the US Civil War.  And, less than a year ago, 70,000 people were evacuated in Frankfurt, Germany when a British bomb from World War II was found.

The NGO Aki Ra helped to start is staffed entirely by Cambodians and, it says, pays "liveable wages".  It also runs a school adjacent to the museum, but not accessible to visitors.  Many Cambodian kids never attend school for a variety of reasons--mainly, because their families need their help on the farms or other enterprises, or because they can't afford the fees.  The stories of some of those students are posted in one of the museum's exhibits.

So, on a rainy day, what did I do after spending a couple of hours among munitions from the US, China, the USSR and other countries, as well as art and other works related to them?  I went to another museum--a preserve, actually, about two kilometers down the road.

So what was preserved there?  Not dragonfruits or lychee nuts or pineapples.  The things "preserved" there were living and not meant to be consumed, at least not on the grounds of the preserve. I'm sure, though, that someone has eaten them:  They sound tasty, at least in the English word for them. 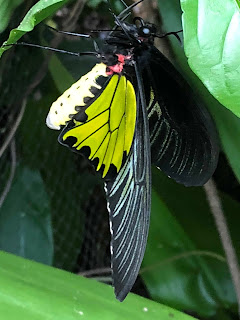 I'm talking about butterflies.  More species have been identified in Cambodia, and in Southeast Asia, than in any other part of the world.  But, even though this area isn't as developed as the US, Europe or Japan, some of those species are, if not endangered, then declining in numbers.  As the exhibit reminds visitors, butterflies are a good "barometer" of ecological health:  Where they can't live and thrive, there are other problems.  I couldn't help but to think about how, last year, I didn't see the flocks of migrating Monarchs I had seen in earlier years on Point Lookout, Long Island.

Like the Landmine Museum, the Banteay Srey Butterfly Centre is run by an NGO that employs Cambodians, from farmers who collect butterfly eggs to the tourguides and the folks who raise the butterflies through all of their stages of life.  Some of the butterflies--which, of course, I'd never seen before coming here--look more like other kinds of insects, or even birds or bats, than what we normally think of as butterflies.  Others look like the ones most of us in the developed world have seen, only in different colors and patterns. 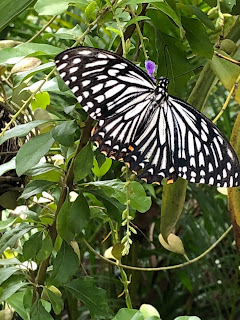 Admission is five dollars (two for kids).  For another four dollars, you can have lunch in the center's cafe.  I had something a staff member recommended:  a Khmer curry with chicken, pumpkin and other vegetables.  Frankly, I would have gladly eaten it no matter where it was offered, and at a higher price! 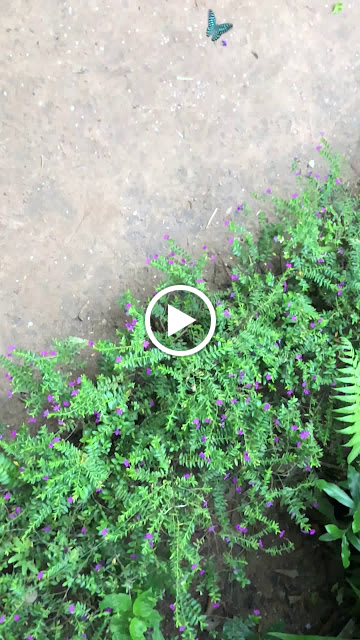 I can't help but to wonder whether there's some "product placement" going on here:  a butterfly center with a sumptuous lunch just down the road from a landmine museum.  It's sort of like watching Breaking Away after you've seen Apocalypse Now.