Don't Blame Me If Her Roof Leaks!

I think I can answer the latter group--and justify the reactions of the former--with this: 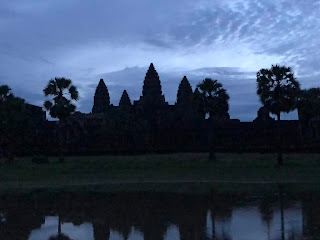 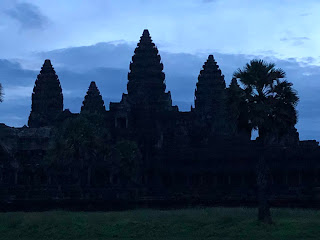 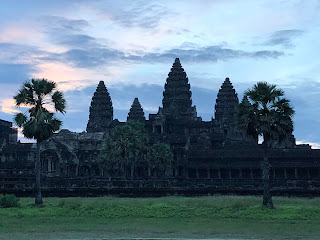 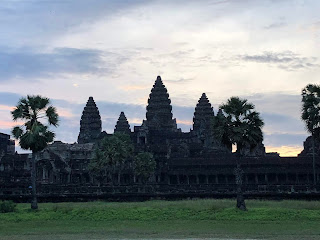 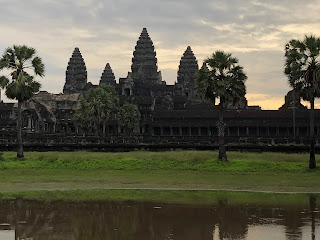 Even though clouds veiled the rising sun, it was still impressive to see the dawning of a day at Angkor Wat.  I plan to return in the hope of seeing one of its fabled sunrises without obstruction.

Then I spent the next two hours on a mini-tour with a guide.  I assured him that I plan to return and hope that he is my guide again.  He told me some very insightful and funny stories, including one about carvings of the dancers inspried by the Asparas, the female cloud and water spirits of Hindu culture.  "They kept the king happy," my guide explained.  "A happy king means a happy kingdom with happy subjects."  It makes sense, even though I don't know for sure:  I have never lived in a kingdom (although my own country is looking more and more like a dictatorship, or an attempt to create one) and have only visited a few, including Cambodia.

Anyway, my guide told me, with some sadness, about how some of the carvings have worn out in spots--in certain spots in particular. 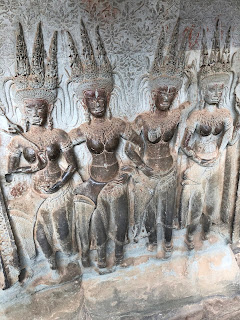 You know which ones he was talking about--and why they "wore out".

After my visit, my day continued with my first bike ride in Cambodia.  Following the advice of my guest house host and a few other people, I went on a guided, organized ride, as cycling here is very different from anyplace else I've ridden.  Suffice it to say that I wasn't riding on bike lanes like the ones in Paris or Montreal. 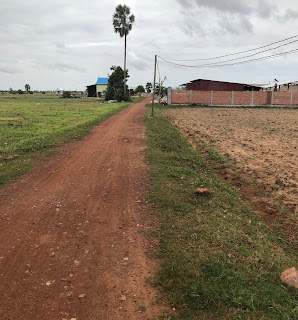 Debates over whether to ride 650B, 700C or 26 inch become pretty meaningless when you're riding on farm paths--or streets that look like moonscapes with trucks, cars, motorbikes, tuk-tuks and just about every other sort of vehicle you can imagine. The rule of road here seems to be that smaller vehicles get out of the way of bigger ones. 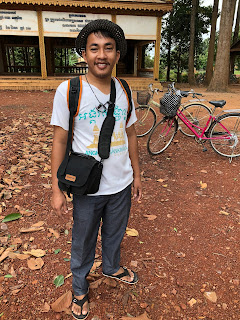 You Sert, my guide, promised to show me "the real Cambodia".  Being an American, who has been in this country for all of two days, I can't say exactly what that is.  But I do know I saw I side of the nation, or at least this section of it, I might not have seen otherwise.

He was conducting a tour for PURE, a not-for-profit dedicated to education and vocational training for local people.  PURE tours venture into the countryside out of Siem Reap and include, among other things, a stop at a marketplace--to buy fresh vegetables that become part of a lunch served by a local family.  (Delicious,by the way!) 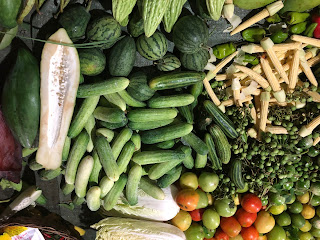 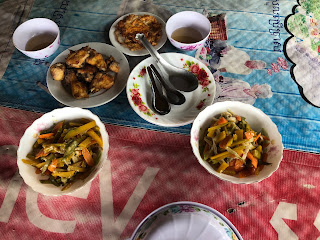 The first stop on our tour, probably about 10-12 kilometers out of the city, was a complex of shrines and monasteries.  One of the first things to catch my attenton was this 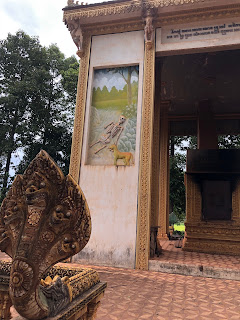 on a column of  a crematorium.  Apparently, cremation is a Khmer (the ethnicity of most Cambodians) custom, and the family keeps the remains "in a beautiful box," as You Sert said. 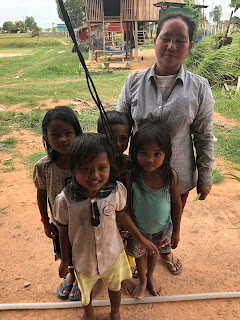 My tour also included a stop at a farm where a woman practiced traditional medicine, including "cupping"--which, according to her, revealed that I'm not ill and that my muscles are fine.  If nothing else, it felt like a nice massage. And her kids simply couldn't get enough of me!  According to You Sert, they all knew--although nobody told them--"she's a teacher". 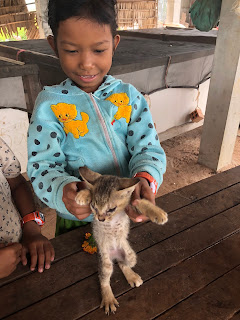 Another stop took us to You Sert's house, where he lives with his wife, mother, year-old son and sister-in-law, who looked 13 years old, if that.  Like most houses in the countryside--only 30 or 40 kilometers away from the city--it's basically a hut, open on one side.  It does have electricity, however, and his family watch TV and video games--and You Sert will be able to send me e-mails from there! 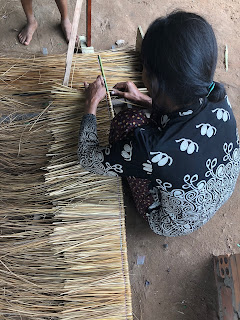 Yet another destination was another farm, where a woman showed me how she weaves tall grasses into the roof of her house.  When we visited her, she was weaving sections that would replace some that currently stand between her, her family and the elements. She even invited me to try my hand at it.  The technique isn't difficult:  You just have to make sure to do it right.  Also, as she explained--and I quickly learned--it's hard on one's back.  After weaving a section with her, I was ready to go back to the woman who practices "cupping".

The ride itself was not at all strenuous. For one thing, it was flat.  For another, the pace was easy.  I don't know whether You Sert was underestimating my abilities or simply being cautious in the cobbly, chaotic road conditions.  He did say, though, that most riders want to sleep after his tours, but I obviously did not.  Also, he said he enjoyed our conversations.  "Most tourists just want to do a bike ride in Cambodia," he explained.  "They don't ask about my life and culture, like you do," he explained.

Oh, and after that ride, I went back to Angkor Wat for a couple of hours. I know I'll be spending more time there.

So, the real question isn't why I came to Cambodia.  Instead, my acquaintances should wonder why I'm waking up at 4 in the morning during my "vacation".  Whether or not they ask, they shouldn't blame me if a Cambodian peasant's roof leaks!