Back in the day, I rode with the Central Jersey Bicycle Club.  During the winter, one of CJBC's Sunday rides involved pedaling about 20 miles to a rural fire station and joining the firefighters, as well as what seemed to be everybody in the village, for an "all you can eat" breakfast.

A popular platter was the "Fireman's Special", which included a couple of pancakes; a couple of pieces of bacon, sausage or some other unhealthy meat; a couple of eggs in whatever style you prefer; and, it seemed, whatever else would fit on that plate.

The food wasn't the greatest, but when you're riding on a cold morning, you tend not to be picky. (Also, it was dirt-cheap:  no small consideration when you're a poor college student, as I was!) Besides, the point of the ride seemed to be, more than anything, camaraderie, with CJBC riders, the people of that village, the firefighters and anyone else who got up early on a cold Sunday morning.

Since then, I've gone on other rides that have included breakfasts, weekend brunches, lunches or other meals.  Sometimes, I'm sure, the food actually was good; other times, I was hungry or simply enjoying my time riding and the company of others.  I can guarantee you, though, that no ride of mine ever included food like this: 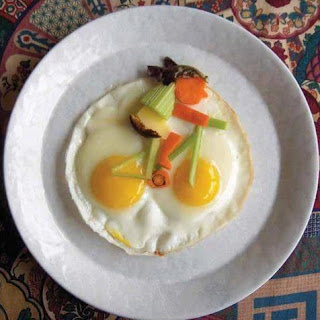