On this date fifty years ago, Malcolm X was assassinated in the Audubon Ballroom.  Today the site of the Audubon, in the Washington Heights neighborhood of Upper Manhattan, is a laboratory for Columbia-Presbyterian Medical Center.  I have ridden by it many times and, in fact, once went inside the Ballroom.  Every time I passed or visited the site I thought, however briefly, about his importance, not only to the history of the US and the world, but in my own life.

I first read Malcolm’s autobiography when I was about twenty.  It was around the same time I discovered African-American writers like Ralph Ellison, James Baldwin, Richard Wright and Zora Neale Hurston—and when I first heard Bob Marley.  In one way or another, they all not only expressed the burning desire to be free, but also made oppression—which is to say, the things that turn people into slaves of all kinds—clear and vivid.

I identified with their wishes and feelings for, as it turned out, reasons very different from theirs.  How could mine not be different?  After all, as difficult as my grandparents’ lives were, nobody brought them here in chains.  Even more to the point, I knew who my grandparents and their grandparents were, even though I had never met the latter.  So, even though I knew that so much of what I learned in school was a whitewashed (Yes, I am conscious of that word choice!) version of the truth, I wasn’t—couldn’t be—conscious of it in the profound way that Malcolm and all of those black writers and artists were.

So, in my own clumsy way, I reacted to the injustices that persisted long after Malcolm’s murder and the deaths of the others I’ve mentioned though their polemics, rhetoric, rhythms, intuition and sense of irony.  What I did not understand was that they could use those tools or gifts or whatever you want to call them because they mastered them in ways that exact terrible, terrible costs.  (Baldwin has written that any people who has a language of their own has paid dearly for it.) What I could not understand was that I was paying my own dues, as it were, but I did not yet understand what I was paying for.  So I borrowed anger, grief, pain and a very dark kind of humor in my own feeble attempts to come to terms with why I could not live the kind of life for which I was being trained—or why anyone should want that kind of life. 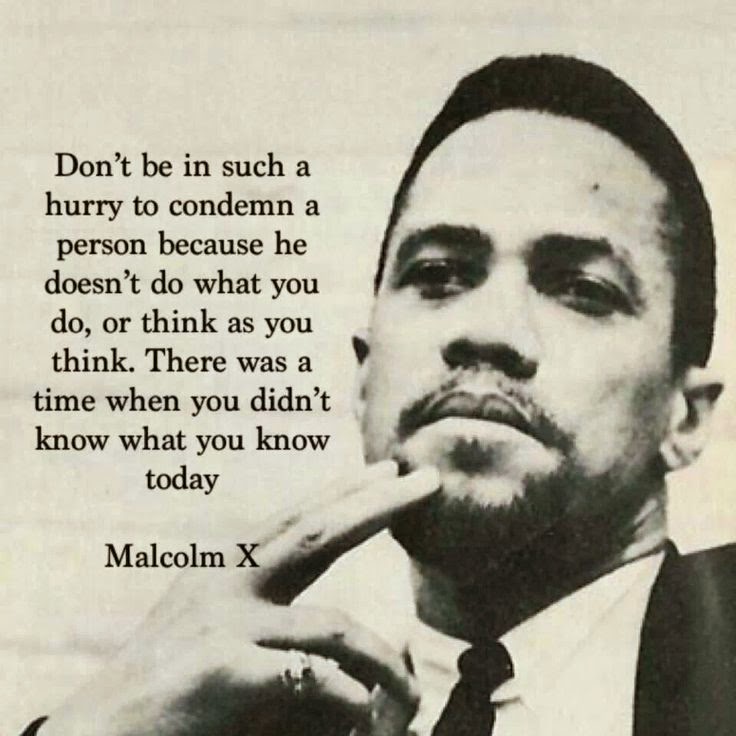 So why am I mentioning such things on this blog?  Well, for one thing, being a cyclist has freed me from a lot of things.  I think of all of the time and money I didn’t have to spend on buying, fueling, maintaining and parking cars.  That is part of the reason why I have been able to live in New York and spend time with things I love:  I didn’t have to work in some job or in some business that would have destroyed my psyche or other people’s lives.  Being a cyclist when it wasn’t fashionable also, I think, has made me less vulnerable to propaganda and groupthink, if it hasn’t made me a better critical thinker or more creative person (though I think it’s done the latter for me).

Of course, for me, freedom has meant living as the person I am.  Anyone who cannot live with integrity and with dignity is a slave or a prisoner or worse.  One way I identify with Malcolm is that it took him as long as he did to truly come into his own, even if he accomplished a lot else before doing so.  His descent into slavery, as it were, came when, in spite of his academic success and oratorical skills, his eighth-grade teacher mocked his dream of being a lawyer. When he, as an inmate in the Charlestown (MA) Penitentiary, became a disciple of Elijah Muhammad, he found a voice.  However, it took him much longer, I think, to find his voice.

Our voice, if you will, is how we express our authentic selves in the world.  For some, it is in their careers or vocations.  For others, it is in creative work or performing:  I think of Jimi Hendrix’s guitar as his voice.  Others express it through a passion or relationship.  Actually, I think that for most of us, our “voice” is a combination of the things we do and are.  Whatever it is, if it isn’t authentic, we’re still slaves or prisoners.  For me, that is the real importance of Malcolm X’s life and work.