We all lose teeth in various ways.  Of course, when we’re kids, we lose all of them so that our “grown-up teeth” can grow in. (A boy in a poetry workshop I conducted wrote, “My teeth are like stars, they come out at night”.)  Then, as time goes on, our teeth fall out or fall apart because of neglect, diet or simply age.  Or we might get into an accident or fight that knocks out an incisor.  Or two.

Wednesday night, I lost two teeth.  No, I didn’t win or lose:  I didn’t fight.  And I didn’t fall on my face.  Rather, those teeth were the casualties of a bungee cord.

Yes, you read that right.  I was pedaling home from work when, in the middle of a turn through a busy intersection, I rode into a pothole.  Just as I reached the other side, in front of a gas station, I suddenly couldn’t pedal.  No matter how hard I pushed, they wouldn’t move. Then, I budged them slightly; they moved as if my whole drivetrain had been stuffed with horsehair.

A bungee cord I’d hooked across the top of the rear basket on my LeTour popped off and entangled fell into the rear wheel. One of the hooks latched onto the non-drive side spokes.  That pulled the body of the chord into the space between the fixed gear sprocket and the hub flange and coiled it.

The hook was so tight in the spokes and the cord so tautly wrapped between the cog and flange that I couldn’t get it out by hand.  Rotating the wheel only seemed to pull it tighter.  I had to borrow a pair of pliers and a knife from an attendant, which I used to bend the hook out of the spokes and cut it away from the cord, which I could then unwind.
At first I didn’t notice the missing teeth.  I felt an odd skipping when I applied any kind of pressure while pedaling.   I figured that something was bent and, as it was late, I crossed my fingers and kept on riding.

I made it home with my chain going ker-chunk, ker-chunk every couple of pedal rotations.  I propped the bike and found nothing bent or warped, not even a chain link. Then, after a couple of more pedal rotations, I saw
that I’d lost two teeth—and, of course, a chunk from the body of that cog. 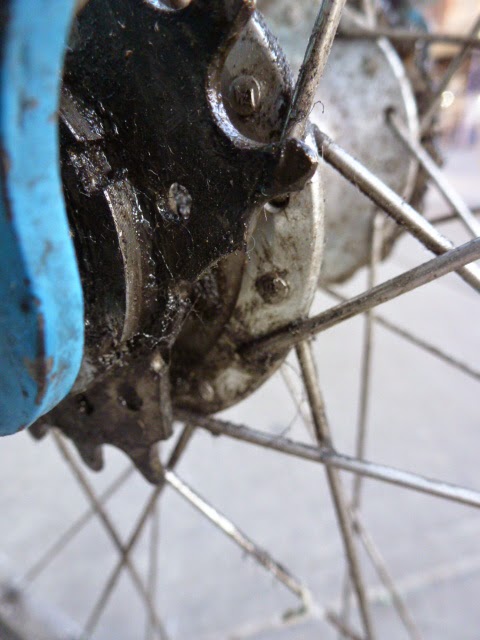 So, I flipped the wheel to the freewheel side, gave the chain (a SRAM PC-1) a couple of shots of oil, and everything ran fine.

The cog was generic.  Maybe I’ll spend a few extra dollars and get something better.  Phil Wood cogs are great (I use them on Tosca, my Mercian fixed-gear), though I’m not sure I want to spend that much, or whether they’ll fit the Formula hub on the LeTour.  Perhaps I’ll get a Surly.  I don’t want to lose more teeth. 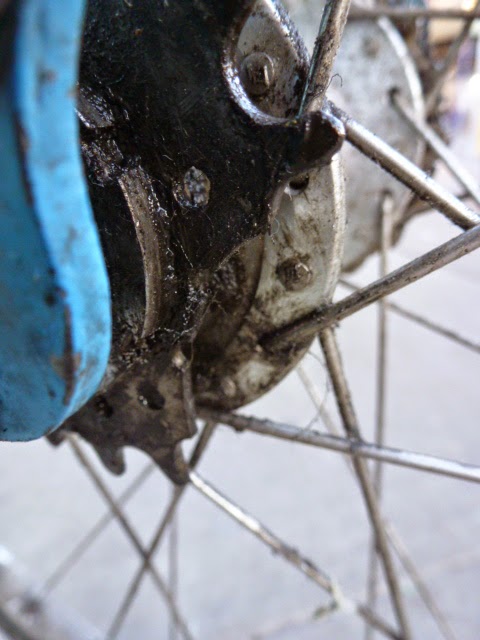