The Real Reason To Ride A "Flip-Flop" Hub!


When I converted a Peugeot U-08 into my first “fixed-gear bike” (I hadn’t even heard the term “fixie”!), hardly anyone else—and only one cyclist I knew—had ever ridden one.  Others had seen them—actually, track bikes, which are a slightly different species— in a store or trade show, or in a magazine or catalogue (Remember, there was no Internet in those days!) but could not conceive of riding them anywhere but a velodrome.

Riding a fixed-gear bike, even with brakes, seemed like one of those things that someone like me would do.  You see, I was not much more than twenty, full of testosterone and other substances, some of which were produced by my body.  Most of the cyclists I knew then—including members of the club I sometimes rode with—were older and started cycling when there were even fewer adult cyclists, and thus less of a knowledge base, than we have now.  I would guess that none of them had seen anything with a fixed gear, let alone seen anyone riding such a machine, when they first took up cycling.

Now, of course, hipsters and all sorts of other people ride “fixies”, at least in places like New York.  A few ride real track bikes. Others are on bikes that came equipped as “urban fixies” or “singles” while still pedal converted ten- and three=speeds.  As it happens, I now ride one bike that’s made for single-speed/fixed gear use (Tosca, my Mercian fixie) and another (my LeTour) that was converted from a 1970’s ten-speed.

Even if there weren’t so many people riding single speeds and fixies, people probably wouldn’t look at me askance.  After all, I am now a woman of, ahem, a certain age who lives with cats.  I am more or less expected to be eccentric, just as nobody was surprised that I tried “crazy” things when I was a young male.

Anyway…There were some things even I didn’t know about when I was cranking down on the French-threaded bottom bracket lockring I used to secure my fixed gear to the Normandy hub that came with that Peugeot.   One was, of course, that track hubs had two sets of threads:  one on which the cog threads and another, threaded in the opposite direction, for the lockring.  It’s amazing that I rode my first fixie for as long as I did without unthreading it!  Another thing I didn’t know about is something that’s nearly ubiquitous now:  the “flip-flop” hub.  Almost all “urban fixies” and “singles” are equipped one; so are many conversions and even true track bikes that are ridden on the streets.

A few “flip-flop” hubs are made for a fixed cog on each side.  Usually, each cog is of a different size so a rider and “flip” the wheel to get a different gear.  But the more common configuration is a fixed gear on one side and a single freewheel on the other.  If you’re riding your fixed gear and get tired, you can “flip” over to the freewheel so you can coast for at least some parts of your ride.

But I discovered another practical reason for a “flip flop” hub yesterday, when I was running some errands on my LeTour. 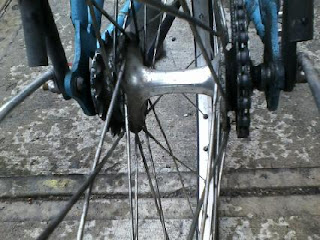 I’d been pedaling through an industrial area of Maspeth, a part of Queens almost no tourist ever sees.  There, the streets are moonscapes or the Ho Chi Minh trail or whatever metaphor you want to use for something that has more potholes than smooth surface.  The reason for such road surfaces is, of course, the trucks that rumble over it.

I’d been pedaling at a pretty good pace when, suddenly, my rear wheel seized.  Since I was riding the “fixed” side, my feet, pedals and cranks stopped in unison:  On a “fixie”, if your wheels aren’t turning, neither are your pedals.

When I stopped, I discovered the cause:  The chain had popped off the cog and wedged itself in the gap between the right crank and bottom bracket shell.  When I got off the bike, I discovered that part of the chain had doubled over itself on the rear cog, which had unscrewed—along with the lockring—from the hub.

That led me to think that perhaps the lockring had vibrated off before the “derailment”.  Whatever the cause, I knew I had a particular problem:   After reinstalling the cog and ring, I could tighten the cog easily enough just by pedaling it, but since I didn’t have a tool—or even a hammer and screwdriver or punch—I couldn’t tighten the lockring enough to prevent a similar mishap.

So—you guessed it—I “flipped” the wheel to the freewheel side.  And I was back on my way.

Now you know at least one reason why you should ride a “flip-flop” hub on your commuter or errand bike!  And you don’t have to be a crazy young guy or a woman “of a certain age” with cats to get away with it.  As Ru Paul says, it’s how you “work it”!