How Routine Was This Repair?


Have you ever felt yourself just slogging and grinding your way on your bike for no discernible reason?  Then you realize your rear tire was slowly losing air.  Or your chain needed oil even more than the salad everyone thought was dry and lifeless.  Or that some part or another was out of alignment or adjustment.

I had such an experience on Thursday.  I wasn’t feeling very well, but I thought I could shake my lethargy by going on a ride, however short.  I started in a direction that could take me to Coney Island or the Canarsie Pier; either would have been a manageable distance and, if I needed to do so, I could take the subway home.

As I approached the Pulaski Bridge, I found myself making a left turn Jackson Avenue, then Thomson Avenue, which meant Canarsie was in the cards.  It was the sort of not-quite-conscious decision I often make on rides.  That was fine; I hadn’t gone that way in a while.  Tosca seemed to be rolling along fine through the industrial area of Long Island City and Maspeth, the now-Polish and Albanian enclaves of Ridgewood and some almost-suburban stretches of Glendale.

Then, after descending the hill from a cemetery in Queens to another in Brooklyn, I started to feel like a paraplegic grasshopper pedaling in syrup.  I glanced down at the bike. Nothing seemed wrong.  Must be the engine, not the chassis, I thought.  In other words, I thought perhaps I was less well or in worse shape than I suspected.


Just after crossing Atlantic Avenue, I realized that the human machinery, however out-of-tune, was not to blame.  I saw the telltale sag in my rear tire. So, I did what I often do when I don’t hear a pop or a hiss:  I pumped the tire, figuring I could pedal the rest of the way to the pier and, if necessary, fix the problem there.


The plan almost worked.  I got to a flea market about three-quarters of the way to the pier.   I wended through aisles of polyester sundresses in screaming hues that make “billboard” jerseys seem as if they were designed by Brooks Brothers  (I’ve never seen a man who actually looks good in one!), electronic equipment that was discarded before the guys trying to sell it were born, CDs of bands you’ve never heard of or don’t want to hear again, and all matter of the most cheaply-made watches, appliances and accessories imaginable.  Of course, I didn’t buy anything.  But I had to pump my tire again:  It had lost about half of its pressure. 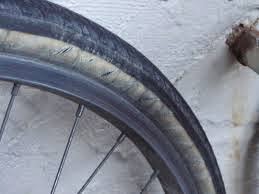 The air was just barely enough to get me to the Pier.  Then I pumped the tire to hear a hiss growing more insistent.  Turns out, a small hole in the tire’s sidewall was opening.


I knew there was no point to fixing it:  No patch would be strong enough to keep the tube from blowing out like a bubble from a piece of gum.  So, I took the L train back.  Oh well.

After replacing the tire and tube, I took Tosca out on the same route yesterday.  Now I was riding the bike I’d always loved.  And I felt better.

And yesterday’s ride—Point Lookout, again—on Arielle felt even better.  In fact, it was nearly perfect: About the only time I noticed Arielle (I hope she doesn’t feel rejected) was when I shifted or braked.  The rest of the time, I felt as if I were sailing the air under the cloudless sky on a day that could hardly have felt more like the first of summer.


I did nothing to maintain or adjust Arielle before the ride.  But somehow I felt I was still riding a wave, if you will, from replacing the tire on Tosca.


What sorts of routine maintenance and repair make the most difference in the way your bikes ride?