Anyway, I was describing my old dilemma, if you will, to a friend.  She sighed knowingly.  “I understand how you feel,” she said.  “The young ones look good.  But finding one with whom you have much in common is difficult.”

“Forget that,” I retorted.  “I’m getting to an age where there are fewer and fewer people who are older than I am.”

She laughed.  “And, you know, when you look for men who are available and don’t have baggage, the pool shrinks even more,” she added.

I didn’t tell her that I wouldn’t limit my prospects to men.  If I can find a woman close to my age with whom I’m compatible, I could make the rest of it work, I think.

Why am I talking about these things?  Well, I found myself thinking about my concept of “older” the other day while riding home.  What triggered such a rumination? While riding to work, I saw two women who, from all appearances, were in the later stages of middle age. (No, they're not the ones in the photo!) One rode a Cannondale road bike with dropped bars; the other pushed pedals on a Specialized hybrid or flat-bar road bike.  Both looked as if they were dressed from the Terry catalogue.

Then, during my bike ride home, I saw a woman who seemed a few years older than the two women I encountered earlier.  She could have been a poster child for the AARP.  Her scarf very stylishly swirled a pastel paisley between her neck and breasts; her pants and blouse were tailored but un-self-conscious.  She was navigating the streets on what looked like a French mixte of some sort:  I couldn’t see the brand, but I knew it wasn’t Peugeot, Motobecane, Gitane, Ficelle or any of the other Gallic marques I know.

Later, as I dismounted my bike in front of my place, I saw a woman riding an English three-speed down my street.  That itself was not as remarkable as that she was, apparently, older than the other women I saw by at least a decade.  What’s more, she looked as if she’d been living in the neighborhood all of her life.  If that is part of her story, she is probably Greek or Italian (She looked the part) and, most likely, the wife of a blue-collar or middle-class worker.

Time was  (There’s that phrase again!), not so long ago, when a woman like her would not have been on a bicycle.  Nor would her husband or any other member of her family old enough to drive.  For that matter, I would not have seen women like the others I mentioned. 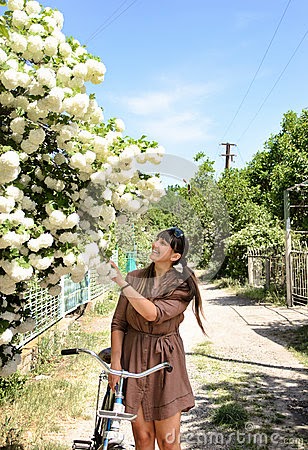 As I’ve mentioned in other posts, when I was in my late twenties and thirties, I could ride the whole length of Vernon Boulevard, near where I live now, cross the Pulaski Bridge and ride down Kent Avenue and further along the Brooklyn side of the East River and New York Bay without seeing another cyclist.  Back then, most of the neighborhoods were blue-collar or lower middle-class, except for some then-low-income areas of Williamsburg and Sunset Park.  The culture of those places was much like that of the neighborhoods in which I grew up:  You simply didn’t ride a bicycle if you were old enough to drive a car, whether or not you actually drove one.


Furthermore, those rare adult cyclists I encountered were all male.  Most were close to my age; occasionally, I’d pass one who were older than my parents.  Usually, such an older male cyclist was an immigrant who never gave up the habit, so to speak, after settling in the New World.  But I never saw a female cyclist unless I rode into a neighborhood like Brooklyn Heights or the Upper East Side or out of the city into a suburban enclave.  The few I saw weren’t commuting or running errands; perhaps they were riding for fitness, but most likely, just to decompress.

It was rarer yet to see “older” women ride.  Of course, at that time, my elders were in their late thirties or older.  I recall two simply because they were so unusual:  One, who was probably in her forties, wore a Chanel suit and slingbacks while riding a women’s Colnago--to this day, the only one of those bikes I've ever seen.  The other rode with my bike club; she was about the same age I am now.  Even more interestingly, her husband didn’t ride.

I’m her now, minus the husband.  That is to say, I’m an “older” woman, at least in the way I used to define it.  Although I like it, I often wish I could have begun my gender transition at an earlier age so I could have lived more of my life as a woman.  Then again, given the conditions of the time, would I have grown up to be that woman I so admired on our club rides?  Or the one I saw on the Colnago?  Or one of those women “of a certain age” I used to see riding to marketplaces, to parks, to stores and offices—sometimes to their jobs—when I was living in Europe?

Email ThisBlogThis!Share to TwitterShare to FacebookShare to Pinterest
Labels: middle age, riding in my 20's, riding in my 30's, social commentary, women and cycling