And it seems that Eddy Mercx's legendary exploits happened a month before that.  He was the first racer I'd ever heard of, and I followed his career passionately. That might be the reason why, in my mind, I still hold an image of him as a young man with long dark hair and an almost-Latin kind of flair that belied his Flemish heritage. 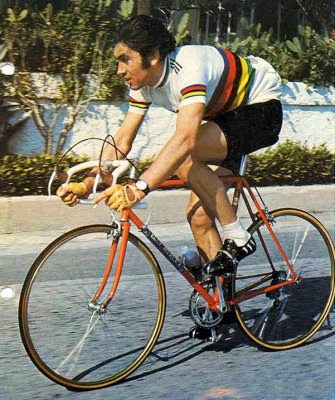 And, of course, I always remember him on his sunset-hued bicycle.  I still think of that color as "Mercx orange" or "Molteni orange", in homage to him and the Italian team with whom he had his greatest professional achievements.

Call me sentimental, but I still think he's the greatest cyclist who ever lived (or, at least, who competed).  In contrast to more recent Tour de France winners, Mercx won hundreds of single- and multi-day classics in addition to his five Tour victories.  (Only Jacques Anquetil preceded him. and Bernard Hinault and Miguel Indurain followed him, in the five-Tour club.)  And he was a superb track rider who set an hour record that stood for twelve years--a geologic age in the world of cycling records.

As I mentioned in an earlier post, he is one of the four athletes who competed during my lifetime (and I had the privilege of seeing) and thoroughly dominated his sport.

(Aren't you glad I didn't mention a certain low-speed "chase" that happened twenty years ago today?'-)