The Gates To The Concrete Plant Park

My ride today was positively perilous.  I had to wade through raging streams.  Worse, I had to fight off the dreaded Randall's Island Salamander. 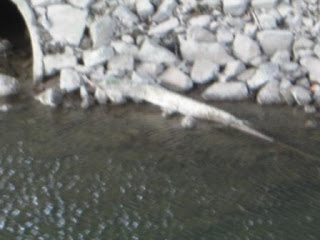 Here, it (Now that I'm at a safe distance, I don't have to worry about riling it up, so I can refer to it as "it" and avoid all sexism!) is, underneath the Bronx spur of the Robert F Kennedy Memorial (nee Triboro) Bridge.  I guess now that Randall's Island's been getting fixed up, the Salamander can't afford to live there anymore.  The Bronx is still relatively affordable.
And I blame the Parks Department for everything.  They're rehabbing the island, and their work forced me to detour. 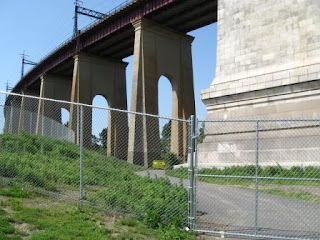 I've taken a couple of photos underneath that trestle.  You've passed over it if you've ever taken Amtrak or Acela (Amtrak Customers Expect Late Arrivals) trains between New York and Boston.  It's called the Hell Gate Bridge.  I guess I should be grateful to the Parks Department for thinking of the well-being of my soul, and those of other cyclists, and preventing us from passing under the Gates of Hell.

Actually, the cost of travel might prevent me from seeing that Gate of Hell this year.  But the Gate under which I couldn't pass is, while not quite as breathtaking as Rodin's Porte de l'Enfer, actually lovely: 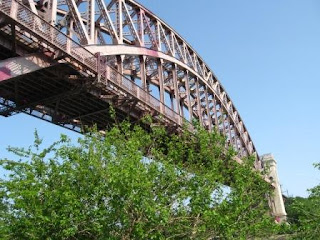 At least, I like it.  I also like something else I saw while riding through the Bronx on my way back from Westchester County: 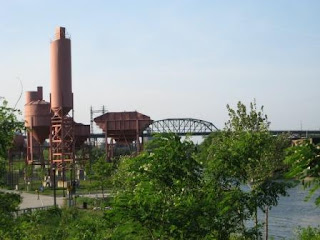 Have you ever, in your wildest dreams or worst nightmares, ever imagined you would ride to a place called Concrete Plant Park? 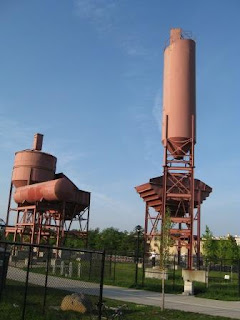 This plant operated from some time during World War II until the late 1980's.  It drew its water and power from the Bronx River, which parallels the path you see.  The path is not yet complete, though it is open.
Those of you who live in New England might see something familiar in that park.  On the other side of the Bronx River are other plants and warehouses, some of which are still operating.  Their red bricks have absorbed decades, or even a century or more, of soot and rain and wind.  They, the the red-rust structures like those of the cement plant, and the river itself are bound by a number of bridges and other spans made from various combinations of steel and concrete.  I imagine it all would be even more attractive in October or November.
Quite a few people, including a number of families, were there today.  A couple of kids climbed the chicken-wire fence surrounding the old plant fixtures; you might have been able to see one of them in my photo.
Speaking of boys at play, here's one, albeit a good bit older, flying his kite by Throgs Neck, where the East River meets the Long Island Sound: 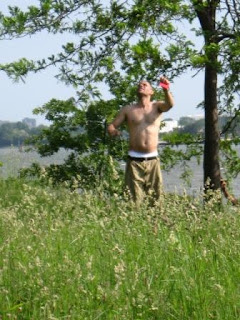