Is It Still A Boardwalk?

Yesterday, before meeting Avi and Jesse (the guys who were riding "stacked" bicycles), I'd ridden along the Rockaway Boardwalk.  That is normally part of my trek to and from Point Lookout.  However, part of it was closed because it was being reconstructed. 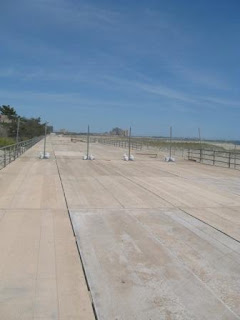 The past couple of years, and this past winter in particular, have not been kind to the boardwalk.  Many of the wooden slats were rotting away or had grown brittle even before the bad weather, and it seems that we've had more coastal storms during the past two or three years than at any other time I can recall.

I guess the city's Parks Department saw how much hard wood costs these days and decided to use concrete instead. I'm guessing that it will hold up to the elements better or, at least, won't splinter and rot the way wood does.
Some cyclists might actually prefer the smoother concrete surface.  But there's still a part of me that likes the clackety-clack of my tires across those boards.
Romantic notions of seaside rambles aside, there is one very good, practical reason not to like the new concrete slabs: 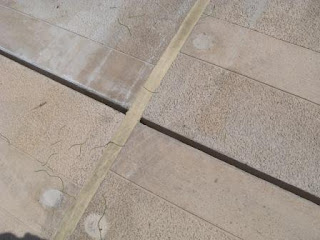 There is a section of the eastern part of the boardwalk, near Far Rockaway, where the work is complete and the concrete boardwalk is open.  There are two gaps, as large as the one in this photo, that run along the length of the walk.
Of course, it's a good thing that there are only two such gaps, as opposed to the dozens of spaces between the wooden boards.  On the other hand, the gaps between these concrete slabs are much wider than the ones between the wooden boards, and are thus more likely to catch a bicycle wheel.  Plus, falling on concrete is more painful than falling on wood--assuming, of course, that you don't get splinters.
Even though I'm not so crazy about the aesthetics of the concrete walk and worried about the gaps, I'll reserve my judgment until I've ridden the concrete at least a few times.
Still, I must ask:  If it's made of concrete slabs, can we still call it a boardwalk?
at May 02, 2011