A Professional Gypsy, Or: How Italian Was My French Bike? 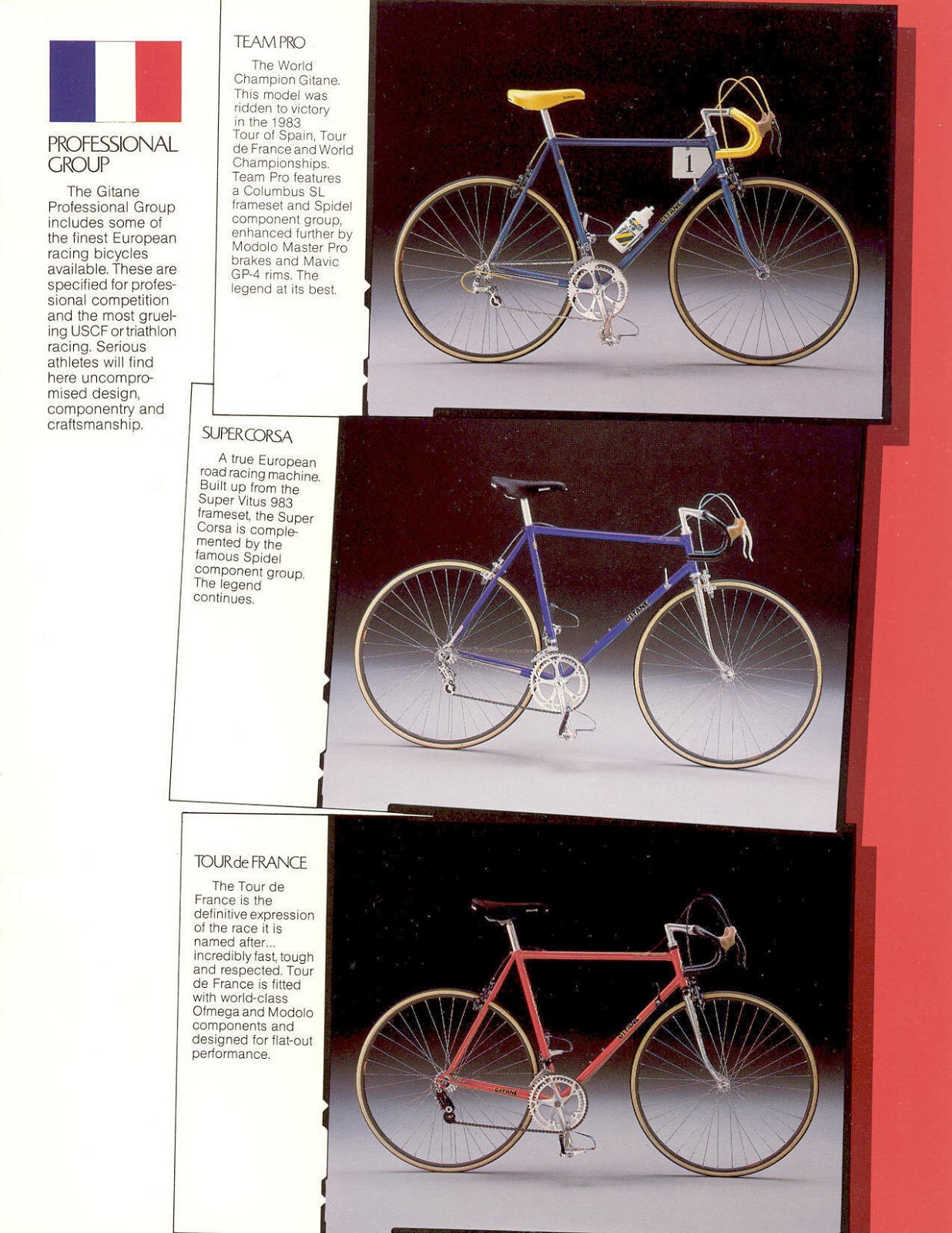 For a few months, my post about my old Peugeot PX-10 has been among my most popular. I think it has much to do with the fact that the PX-10 was the first high-performance bicycle many cyclists of my generation rode or owned.


Riding it after pedaling any Schwinn bike besides the Paramount, or other popular ten-speeds like the Raleigh Grand Prix or the Peugeot U0-8—let alone three-speed “English racers” or the balloon-tired behemoths Schwinn, Columbia and other American companies made—was like getting onto a rocket after spending your life on a donkey cart.  I didn’t realize until later, when I rode other high-performance bikes, that the PX-10, while lighter than most of its competition, was also less stiff and “whippier” than other racing bikes with tighter wheelbases and angles. On the other hand, it gave a more comfortable ride over long miles.

The PX-10 was similar to many other French racing bicycles of the time.  Their designs hadn’t changed much since the days just after World War II, when many roads were damaged and racing teams, not to mention individual racers, had small budgets.  Those conditions made versatile bicycles that could be ridden in a variety of conditions necessary:  There wasn’t a lot of money available to buy different bikes for different conditions.

The stability or stagnation—depending on how you see it—in French bikes was even more pronounced in the bikes’ components than in their frames.  When Huret introduced its “Challenger” derailleur in 1974, it was the Nantes-based manufacturer’s first significant design change in nearly three decades.  Likewise, Mafac’s center-pull brakes, better than anything else available when they were introduced in the 1940’s, seemed as outdated as whalebone corsets three decades later even if they were still more powerful than almost any others—including Campagnolo side pulls.


French bikes and components, long benchmarks by which others were measured, seemed to develop an inferiority complex, at least in the perception of racers and other high-mile cyclists. They, and wannabes, moved on to Italian or custom English or American bikes.  Even those who continued to mount their Gallic steeds would replace components, whether or not by necessity, with newer designs and more exotic finishes from Campagnolo and, to a lesser extent, Japanese manufacturers.


Bike and component manufacturers operating sous le drapeau blanc, bleu at rouge would update their designs in the late 1970’s and 1980s.  Mafac and CLB, the two country’s two top brake manufacturers, finally developed professional-quality sidepull brakes as well as centerpulls with tighter clearances than their older counterparts.  Specialties TA and Stronglight made cranks with chainrings interchangeable with those from Campagnolo.  And, of course, venerable rim and wheel manufacturer Mavic came out with a gruppo of components that was more advanced in design—and, to some people (including yours truly), of higher quality and more beautifully finished—than the famous Italian components that had become de rigeur in European pelotons.

Even more important, French racing frame designs began to mimic those of Italian bikes like Colnago, De Rosa and Cinelli.  Wheelbases became shorter and frame angles steeper; around the same time, curly-edged Nervex lugs gave way to spear-point frame joiners.  And French bike makers started to employ the same kinds of paints and graphic schemes found on their well-known Italian counterparts.  By the mid-1980’s, some of us joked about “French bikes in Italian drag” and "Italian bikes in French drag".

Actually, a few “French” bikes were really made in Italy and had French decals applied to them.  But even more Gallic manufacturers followed a trend Motobecane started in the mid-‘70’s with their “Team Professional” frame.

(Aside:  Around the same time, Motobecane became the first European manufacturer to equip bikes—mostly entry- and mid-level—with Japanese derailleurs, freewheels and cranksets. Those bikes also looked more like English or Japanese than other French bikes available in those price ranges.)


For a time, I owned and rode a French-made “Italian” bike:  a 1985 Gitane Professional.  I bought it seven years  after its was made from a man who owned a bike shop he sold during his divorce.  He told me he raced it, but the bike didn’t seem heavily used in spite of his not-inconsiderable girth. (In those days, I didn’t share that trait and could therefore note it without anyone accusing me of being a pot who called the kettle black, or however that metaphor goes.) 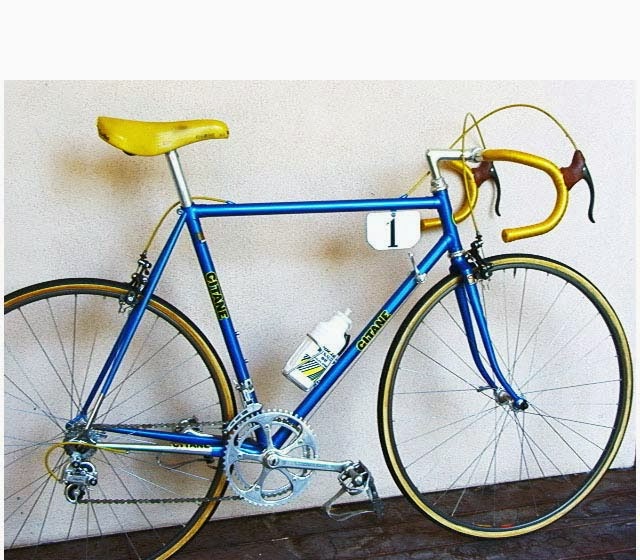 How Italian was my French bike?  Well, its nearly shared the geometry of the Colnago Arabesque I owned at raced at the time.  My Gitane was even made of Columbus SL (the company’s standard racing tube set at the time) with longpoint lugs and was equipped with Campagnolo components and Vittoria sew-up tires.  I believed my Colnago to be somewhat more responsive and Gitane to be a bit cushier (though not cushy). I may have had that perception, however, only because one bike was a Colnago and the other was a Gitane.


I bought the bike, frankly, because I couldn’t not:  The man took $200 for it. That was a steal, even twenty years ago. He was one of the first riders I knew who abandoned steel frames: “In ten years, they will be extinct,” he said.  If I recall correctly, he’d been riding a Cannondale and had just bought a Merlin titanium frame.


I bought his Gitane not long after a random stranger bought my Schwinn Criss Cross.  That summer, I put one of my sets of clincher wheels on the Gitane and took it on a tour from Paris into the Loire, Indre and Burgundy regions and back. I’d packed light, so the bike didn’t seem unstable; in fact, I liked its responsiveness, especially when I pedaled up hills.


Somehow it seemed appropriate I was doing such a trip on a “Gitane,” which means “gypsy.”  I had not mapped an itinerary:  I bought a round-trip ticket to Paris and my only concrete plan was to visit a friend there at the end of my trip.


I probably would have taken more trips on that bike—to Italy, perhaps—had it not met its demise only a couple of months after I got home.  Some guy whose headphones rendered him oblivious to his surroundings sideswiped me and caused me to crash on a turn in Prospect Park.  I saw him a few times after that and, naturally, he pretended not to see me.


Had he been more skilled or careful, perhaps I might have owned and ridden a dozen or so fewer bikes than I have in my life.  Still, in its brief time with me, my Gitane left me with some pleasant memories.  But it got me to thinking about the expression, “When in Rome, do as the Romans do.”  Could my it be that my Gitane Professional, a French bike with Italian style, behaved like a Frenchman when it was in France?

Email ThisBlogThis!Share to TwitterShare to FacebookShare to Pinterest
Labels: 1980s, bikes of my past, French bikes, Gitane Professional, Italian bikes