How A Windsor Became A Raleigh

That’s how it seems to work for me, anyway.  In any event, that’s what happened to the Windsor Professional I built up.

As I mentioned in my previous post, I didn’t like the ride.  So I sold the frame and transferred the parts to another.

Back in those pre-Internet, e-Bay and Craig’s List days, we learned who was selling what by word of mouth, bike club newsletters and bike shop boards.  And, here in New York, we checked the board at the American Youth Hostels store on Spring Street. 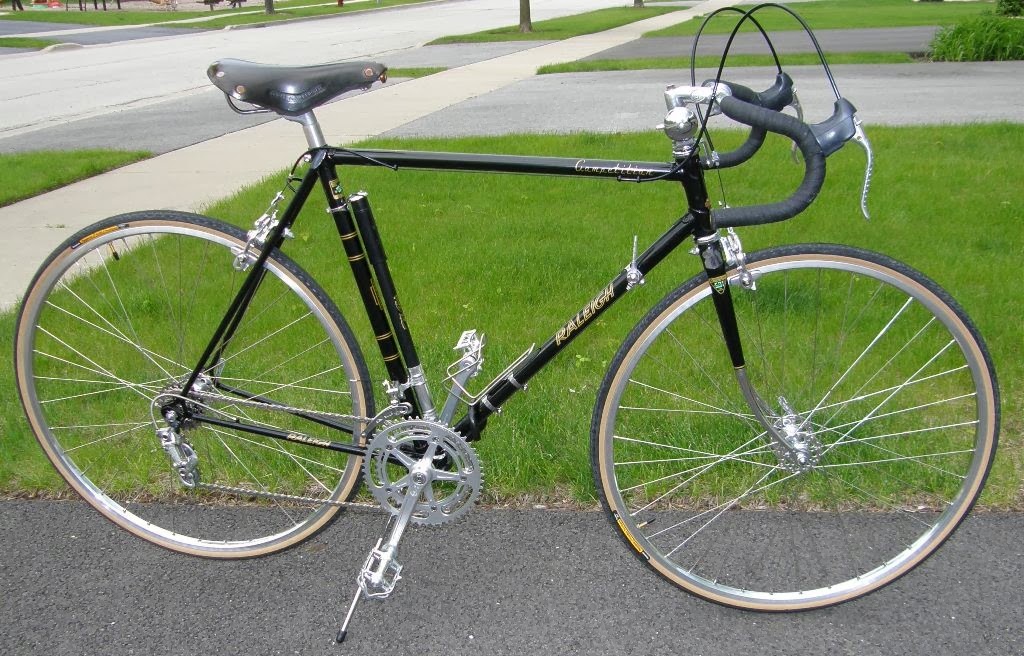 It was on the latter that I saw a listing for a Raleigh Competition frame.  Built from Reynolds 531 tubing with “sport” geometry, it was, in concept as well as ride, similar to the Peugeot PX-10.  Actually, I’d say the Competition—at least the one I had-- was a bit stiffer, but not harsh.

I’m not sure of whether Raleigh sold only the frame.  During the 1960’s and into the late 1970’s, it was equipped with quality French components such as the Specialtes TA three-pin crankset, Normandy Competition hubs, AVA tubular rims and Huret Jubilee derailleurs. The brakes were Weinmann centerpulls, as they were on all derailleur-equipped Raleighs except the Professional. In the late 1970’s, the wheelbase was shortened a bit and, possibly, the angles were tweaked a bit to make it stiffer.  At that point, Raleigh started to equip the Competition with Campagnolo Gran Sport components and Weinmann Carrera side-pull brakes.  The rims were switched to narrow Weinmann concave clincher rims.

In both incarnations, the frame was finished in glossy black with gold lug linings and graphics.  The lettering and other elements of the graphics were updated when the Raleigh changed the specifications.  My frame was the later version, from 1978.

I liked the ride quite a bit:  not quite as aggressive as the Colnago I owned at the same time, but stiffer and quicker-handling than my old PX-10. And it didn’t have the hard, dead ride of the Windsor Pro it replaced, or of the Cannondale I rode a couple of years earlier.
Actually, it was like the Romic I mentioned in an earlier post, and a slightly less aggressive version of my current Mercian Audax Special, a.k.a. Arielle.

So why did I strip and sell it?

If I recall correctly, the frame measured 58 cm or 23 inches.  Normally, I ride 55 or 56 cm, depending on the design of the frame.  I believe that by the time I bought the Competition, Raleigh stopped making it—or, at least, they were making a very different bike  and calling it the “Competition”.  Also, around the time I bought the frame, Raleigh had shifted most, or possibly all, of its production out of England.

More important, even if I could have found another used Competition, it probably wouldn’t have fit me.  You see, Raleigh had this habit of sizing their bikes in two-inch (five-centimeter) increments.  So, if the bike was offered in a 23” frame, the next-smallest would be 21”.  I probably could have ridden that size with the seatpost extended.  However, other proportions of the frame might not have been right for me.

I know someone—whom I mentioned in an earlier post-- who has a Raleigh Competition just like the one I had.  He turned it into a Randonneuse, with fenders, racks and an Acorn handlebar bag.  He loves it.