Riding To End The World As They Knew It

In an earlier post, I wrote about a remark Susan B. Anthony made:

"Let me tell you what I think of bicycling. It has done more to emancipate women than anything else in the world.  It gives women a feeling of freedom and self-reliance."

Historians, professional and amateur, are taking notice of something that has been neglected, or simply overlooked, for a century:  the relationship between cycling and women's liberation. 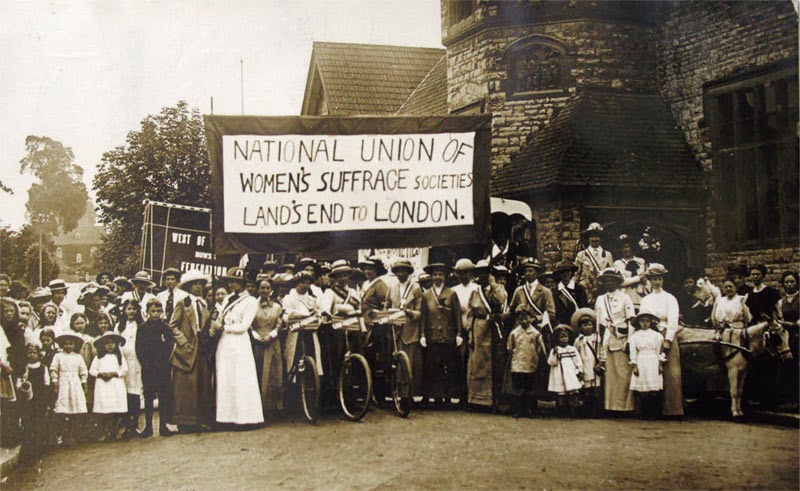 It's more than interesting to note that the heydays first modern feminist movement and the first "bike boom" almost exactly coincided during the last decade of the 19th Century and the first decade of the 20th. As I and others have noted, the bicycle gave women, for the first time, an independent means of transportation and led to the design of clothing that was less restrictive than the hoopskirts and corsets "proper" ladies wore until that time.

Of course, those were the very reasons why some--almost all of them men--thought that in seeing their mothers, sisters, wives and daughters astride two wheels, they were witnessing the decline and fall of civilization.   To wit;

“Cycling tends to destroy the sweet simplicity of her girlish nature; besides how dreadful it would be if, by some accident, she were to fall into the arms of a strange man.”

As "Sam B.", the author of the blog Fit, Feminist and (Almost) Fifty wryly notes, "I can't imagine falling off a bike into someone's arms (that would take rather a lot of coordination)".  As for me, no one ever said that anything destroyed the sweet simplicity of my girlish nature.  For that matter, no one has ever imputed sweet simplicity to me. At least, I'm not aware of anyone who's done such a thing.

But I digress.  The irrational fear expressed in the minister's quote about how cycling makes good girls go bad was, unfortunately,  shared by some doctors.  Worse, those male medical professionals amplified such nonsense with "scientific studies" claiming that cycling also made women infertile.

(Ironically, every fifteen years or so some doctor or another claims that cycling causes infertility in men.  Hmm...I guess all of those Tour de France winners who had children are the exception.)

Anyway, those fears were not expressed during the second bike boom and modern feminist movement--which, like their earlier counterparts, coincided.  The difference is, of course, that Betty Freidan, Gloria Steinem and the other "Women's Libbers" of the 1970's did not see the bicycle as a vehicle for female independence.  In fact, they seemed not to think about bicycles at all:  I don't recall them mentioning pedaled two-wheeled vehicles in any way.

Perhaps one could argue that the bicycle had already done its job in liberating women.  But there was another striking paralell between the two convergences of feminism and cycling:  At the beginning of each, racing and long-distance cycling were almost entirely male preserves. If anything, more than a few women, especially the young, were discouraged from becoming serious cyclists for that very reason.  Rather than predict the moral decay that would ensue from women mounting steel steeds, many male cyclists instead made--sometimes unwittingly--rides and clubs less than hospitable to women.

These days, I see a lot more women on bikes than I did in my youth or even just a few years ago. In yet another interesting reflection of an earlier time, many of the women I see on bikes are riding independently, or with other women.  In other words, they're not trying to become members of a "boy's club": Instead, we are making ourselves more independent, like the women of whom Ms. Anthony spoke more than a century ago.